For Honour and Glory 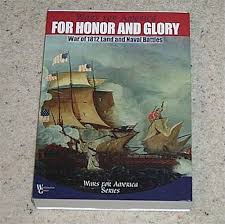 From Worthington Games (as it was) their game of the war of 1812 including the naval side.

A number of years ago I owned a copy of the above game produced by Worthington Publications (as they are now known). It was two games in one as there was both a land and a naval game contained therein. The land rules are best described as Command and Colours without the command cards, instead one used a set number of action points that could be adjusted as the result of a dice roll. There were no figures and units were represented with a single wooden tile with a label depicting the unit. There is a sequence of numbers around the edges with the idea being that a unit took losses the edge facing the enemy was rotated to the new combat value. The original, pre-Plastic Soldier Company version of Hold the Line (covering the American War of Independence and the French and Indian War used a similar method  which is reminiscent of the technique employed By Columbia Games except the tiles are always shown face up – no fog of war here then!

The naval game is very simple and, one suspects that in the interests of economy, contains only two small metal ships and the appropriate tiles. The rules use a system of tiles with directional arrows to determine movement but the arrows themselves are printed on the land game tiles. This is not easy on the eye but an alternative would not be difficult to cobble together. The actions the game covers are as follows:

I owned this game for a couple of years and played it solo a few times although I did not do anything with the naval side at the time. Near as I can recall it ended up being disposed of during the great American Wars cull of my collection. Fast forward to the present day and I am delighted to say that I have managed to track down another copy which is currently on its way to me. This time I do not intend parting with it quite so readily!

In common with my Battle Cry ACW setup I have a hankering to do the same with another of the American wars - French and Indian, War of Independence or 1812 - but at this stage am undecided as to which. Certainly the naval dimension of 1812 is an interesting topic for low level naval actions and the land side has a lot of positives - small forces, colourful armies and easily transferable to the table top.

the Black Seas Frigates and Brigs scream 1812 to me...

PS Don't give up the ship!

Nice to see you've found a copy as Stuart Asquith recommends this game in his 1812 book.

It will certainly scratch an itch in the short term and will hopefully give me some ideas.

I was lucky to be able to score a copy of this relatively cheaply.