WW1 in the Indian Ocean 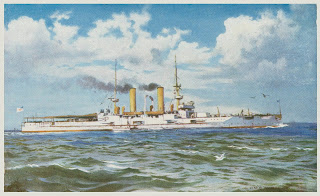 H.M.S. Swiftsure in her tropical plumage. I have always liked this class of battleship despite being rather non-standard for the Royal Navy as they were originally ordered by Chile to offset a pair of Argentinian armoured cruisers. Fascinating to speculate how they would have fared against the German Scharnhorst class.

The weekend did not go exactly as I planned but it was productive in any event. For a variety of reasons the inaugural game using my 30mm ACW collection did not take place - I probably could have fitted it in but had I done so it would have been a rush and I really wanted to spend some time on it. I have a scenario in mind and need to cobble together some terrain pieces but nothing major. My plan now is to run this over next weekend all being well.

As part of what I was able to get done I had a sort out of my 1:2400th scale Tumbling Dice ‘Age of Battleships’ British and German forces. You may recall that I had amassed these with a view to tackling something set early in WW1 in the Indian Ocean that tied in East Africa, the Arabian peninsula and the legendary island of Madasahatta. The basic rational behind my idea was that the German East Asian squadron sailed West rather than East and that the Turks had naval assets in and around the Indian Ocean - including the Goeben and the Breslau (supported by the Blucher) that had somehow managed to evade the Royal Navy and in an audacious move had used the Suez Canal to escape.

The above basic idea led me to acquiring a couple of fleets from Tumbling Dice, supplemented with a Gorben and a Breslau from GHQ. If I needed anything further than Stonewall Miniatures would be the next port of call. these models are really nice but have sat in their bags for some months so I thought it would be high time I sorted them out and listed what there is. I am not planning doing anything with them just yet but at least it means that once they go back into storage I will know what there is. As it happens I am considering adding some French ships to the collection simply because they have some truly odd looking ships!

From GHQ are the Goeben and the Breslau

The forces above feature a large number of cruisers and it can be seen that whilst the Royal Navy has the numbers there is a lot of second class material in evidence for 1914. From a historical perspective I could run Coronel and the Falklands and also the some of the pursuit of the Goeben and Breslau. Since I acquired this lot there have been a few additions to the range that I would be keen to acquire and I certainly need to bolster the merchant contingent.

I have in my mind's eye the plan for how I will realise this project in due course but there is much to be done beforehand. This will be a long term project or rather it will be a long time until I get to it as I have a couple of other things that will come first in the order of priority.

Now that's something that I'd really be interested in. I have plans for something a bit less historical but pushed back into the pre-dreadnought era c1905 or so. China Station white is very attractive too.

Funnily enough that was going to be my original destination but probably a little earlier - around the time of the Boxer rebellion. I have been careful to include ships that at some point in their career served on the China Station or in the Mediterranean or Indian Ocean.

It is certainly something I will get to - I am just not sure when!