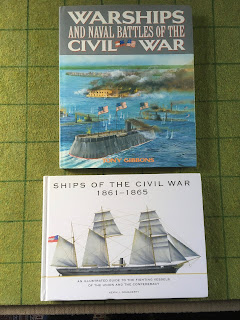 Overkill but in a good way....

Hmm. I suppose it is my own fault in a way. Whilst going through one of my many reorganisations a couple of years ago I offloaded a while pile of ACW naval books to the redoubtable Mr Fox. This was during one my ACW 'off' moments - and was one I have grown to regret! Anyway, to cut a long story short a short while ago I acquired a copy of the book Ships of the Civil War 1861 to 1865 by Kevin Dougherty and published by Amber Books. The title duly arrived but had a few dents in the cover (you can see in the picture) so I took the matter up with the seller (it was an eBay transaction) and they very generously opted to let me keep the book and to refund me in full rather than me having to return the same. Naturally I was rather pleased with this outcome but as an aside why oh why do some booksellers only send out books in heavy duty plastic envelopes rather than using card to protect the corners? I know there is a cost implication but surely wrapping books properly is safer than relying on the tender mercies of the postal system?

I digress. The book features over a hundred types from both combatants with an illustration on one side and the text on the other. It is not hugely detailed nor as good as the other title in the picture above but it is still an excellent primer. The other book in the picture is very highly regarded in terms of coverage and technical detail and was one of the books that headed out from my collection during one of my ACW 'culls'. Despite a couple of near misses I was finally able to track a copy down (again) for a pretty good price - using the refunded proceeds from the other book - and so was set fair for the naval side of my ACW project. Then I made the discovery that was by turns both amusing and embarrassing.

The illustrations in the 'Ships' title are the same as in the 'Warships' title by Tony Gibbons. In other words Amber have used the same artwork but added different text - presumably this was added by Kevin Dougherty. To be honest the 'Warships' title is definitely superior in terms of coverage but the 'Ships' title would certainly be adequate for what I am planning. Taking a couple of positives from the experience I now have two books effectively for the price of one. 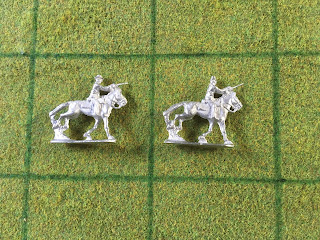 The hat wearing Confederate cavalryman on the left and as fez wearing Turk on the right.

As well the above I also spent some time working on a couple of Spencer Smith conversions which you can see above. I am not entirely satisfied with this effort as the fez has come up a little on the small side although as a proof of concept it works well enough. The trickier conversions will be the fez wearing gun crew as well as the various command types as I will need to build up a kepi into a fez.

It looks like I will be reaching for the green stuff  soon!
Posted by David Crook at 09:32

The first book looks really interesting and have added it to my wish list:)

It is quite superb but is very much in the encyclopedic style. Certainly a good one to have in the collection.

I don't know the Dougherty book but Gibbons' is first rate and has a ton of ideas for battles. Hope to see some of your ships and battle reports posted here!

A good library, and the fortitude to maintain it, is a significant asset that I have never regretted.
Although I do fear that when I'm gone my wife will sell my volumes for what I told her I paid for them...

Once the ships are done (whatever scale I end up choosing!) I will certainly be posting battle reports and pictures.

If your good lady sells them at the price you told her you paid for them I suggest you let her know that I would be very interested in buying them! :-)

I have a very tatty copy of the ACW warships book...great for painting and pretty comprehensive.

It is very useful indeed and thanks to your excellent work with 1:2400th ironclads I am seriously thinking about using that scale for the my ACW project. the Tumbling Dice range is not vast but covers many of the basics - certainly enough for my needs - as well as some shore batteries.