Preparing for the Inaugural Game 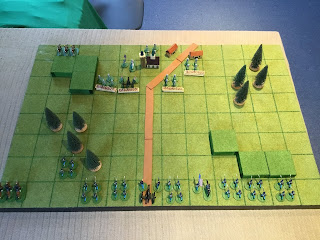 The opening positions as seen from the Union start line. The small town of New Rayleigh and the centre of the Confederate position.

I finally got around to setting up the inaugural game using my 30mm Spencer Smith ACW collection and to say I was delighted would probably be something of an understatement! The actual battle report will feature in a later post, simply because I want to go full on purple prose for the write up - you have been warned... 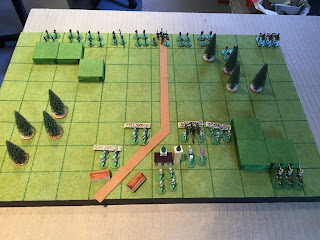 The view from the Confederate lines showing the extent of their defensive position.

This post will go over some of the organisation of the game and why have done what I have done to bring it to the table. To begin with the rules I am using are something of a hastily cobbled together conversion of the tactical rules found in Worthington Games Honour and Glory. Now it would seem a little odd using a set of rules for the war of 1812 For an ACW game but there is a couple of reasons for this. To begin with I rather like them - they are similar to the usual Command and Colours system - as they have a couple of little tweaks that appeal to me (more of which in a later post). Secondly, they are very similar to the ACW rules that  Worthington have available online and that accompany their new game on the subject. Obviously both of these sets are designed with hexes in mind but I have made the necessary adjustments for a square grid. I will be using the Portable Wargame in due course - indeed, they are my preferred set - but this was an itch that needed scratching!

I mentioned that I wanted to organise some theatre specific scenery so in its absence I had to make do with what I had to hand. Out came the Town in a Bag buildings, my very crude but functional hills and roads etc. I was pleasantly surprised by how good it all looked within the confines of using a 3ft by 2ft playing area.

The scenario was a straightforward attacker/defender game with a small Confederate force tasked with holding the town of New Rayleigh against a probing attack organised by the Union. The Rebels are outnumbered but this is offset by the Gentleman of the South being in prepared positions.

The forces are comprised of the following:

I toyed with the idea of replacing one of the Union infantry units with another cavalry unit and increasing the artillery strength point to 3 but I stuck with my initial choice - mainly because by the time it occurred to me the game was set up!

So there you have it - the forces are deployed, the plans have been made and all that remains is the fight itself.

I hope you will enjoy reading about it as much as I did fighting it!

A rather splendid looking table and set up there .

Super set up you have there. I look forward to hearing more about the game.

I love the Old School look and great to see the figures poised for action. Look forward to reading the AAR.

Many thanks old chap. I have some ideas around the terrain situation going forward but for now what I have seems to work well enough. It is really good to get some figures on the table once again though!

The tabletop terrain seems to look right with your excellent figures, and I look forward to reading your battle report.

The write up is well under way and I only have a few points to check so all being well you will nt have too long to wait. It felt really good getting a game in again that’s for sure!

Not long to go old chap! For reasons that will become obvious I needed to spend a little time on this in the interest of continuity.

I was pleasantly surprised at how the figures looked so well alongside the terrain I was using. I had a kind of mental disconnect between the two as I thought the figures would dwarf the buildings but they actually do not look too bad alongside.

In the short term it means that I can take my time over the scenery as the need for theatre specific items is not quite so pressing.

The AAR is turning into bit f a labour of love but it is great to back writing one again!

The board really looks the part. I have been using 8x8 squares but intend to try a wider field (when space allows) such as 12x8 or 16x8 squares. The little wooden villages are very versatile! I'm also keen to read the battle report.

Many thanks old chap! Initially i concerned about the size of the squares as these are 3 inches across. Having set the game up they actually look far better than I had hoped and even the terrain works very nicely indeed. I may 'Americanise' some of the buildings in some way and I really need to do something about the hills.

I was going to avoid making anything for a 3" square as I was planning on migrating to a 4" version but am now not so sure.

The AAR is currently being written and I want to take some time with this for reasons that will become clear when it is posted.

A very attractive boardgame look. I hope the playing will be as enjoyable as the look of it suggests.

I am rather fond of the 'boardgame' look and in many ways this is an evolution of the block armies. It is not to everyone's taste but I love it!

It was a simple scenario but gave a very exciting game as the AAR will testify!

The 8 X 12 board looks great. Makes me rethink using only square boards with squares. Looking forward to After Action Report !

8 x 12 works rather nicely although I would prefer 13 x 9 ideally. The AAR is well advanced and should be appearing soon.

it looks splendidly old school and highly playable. Tough nut for the Union to crack, I look forward to hearing the results!

Many thanks old chap! Old Painter Bob did a cracking job on the figures and alongside the rather stylised terrain I am using the overall effect is really rather nice.

It proved to be a tough nut for the Union but....(you will have to read the AAR to find out!).

Hi David, I’m starting to come round to the idea of ‘small’ board game style games with figures. Especially with a rule set that allows a complete game to be played out in an hour or two. I still love big games with hundreds of figures but time/energy isn’t often available. It might be the perfect solution.

I must confess that seeing the figures deployed on a tabletop, albeit smaller than I would like (I am looking at a 4ft x 3ft table with 4” squares/hexes), was a real treat and very inspirational. It has set the tone for how I want to game going forward and it is really simple to organise.

I have fought some truly epic battles over the years involving thousands of figures but from a practicality point of view I cannot see myself doing them again.