More on Masts and Spars 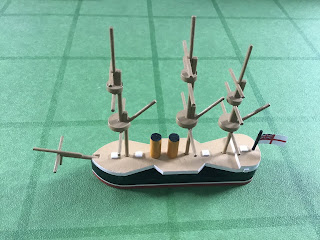 My model the H.M.S. Superb with the mast assembly being used as the template for the five ships currently under construction. She is scheduled for a minor repaint at some point as I want to paint all the spars black. She will be getting some squadron mates at some point but sadly not for a while.

Progress has been a little slow over the weekend as my grandson was with us and as the weather was not great as a family we played a goodly number of boardgames which was enormous fun. I was able to spend a little time between round of Boku, Buccaneer, 5 Seconds and Scrabble on the next batch of ships - namely the masts.

As I am building five ships that will require a full sailing rig I decided that a production line approach for the masts would be a good idea - especially as the masts would all be of the same size. Strictly speaking I think that the sole frigate should have a slightly larger set than the four sloops but in the interests of expediency they will all be the same. I used the rig of my earlier built H.M.S. Superb as the template to work from and so the great bamboo barbecue skewer chop up took place on Saturday afternoon - with the results you see above. 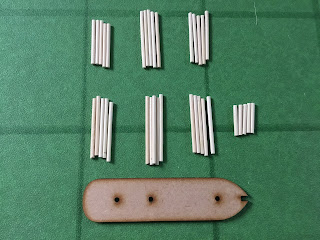 The masts and the top deck hull template I shall be using. Note the pre cut mast holes and the notch for the bowsprit. The eagle eyed amongst you will notice the pencil marks on the lower mast section - there is a small allowance of excess skewer as this is what will drop into the locating hull when assembled. The template is 3mm deep and this is plenty for a nice and secure joint once the masts are superglued in place.

Each ship requires seven pieces of bamboo so that was thirty five pieces in all. The spars will be a little different in that each ship will require fifteen pieces of wooden cocktail stick - sixteen if I decide to have a stern mounted flagstaff. I shall get this lot cut out today and indeed, I am planning on getting the masts assembled as well. I shall be using six MDF fighting tops for each ship so there is another thirty pieces to add into the mix. By comparison the hulls will be a piece of cake to build as all I shall be doing is adding some hatch covers, a funnel base plate and in the case of three of the models, a pair of pivot mounted guns (meaning I shall need to assemble six of them). Finally, I will need to cut five lengths of dowel rod for the funnels.

Whilst I was cutting this lot out I offered up a grateful prayer of thanks to the patron saint of modellers (whoever that may be!) that I have a space to be able to assemble and leave this lot out safely and without risk of being disturbed. Fifteen fully assembled and painted masts will take up a lot of space until they are fitted to the appropriate hulls!

I should point out at this stage that the models I am building are very much of the ‘based upon’ variety. They will look the part in a ‘purely representational’ way but are not designed as museum quality super detailed pieces. Looking at the collection as a whole it is fair to say that some are closer looking to their historical originals than others but super accuracy was never the aim from the outset. Still, for all that they look very effective on the tabletop.

Besides, it has been a lot of fun building them!

That looks lovely David...
If you were going to rivet count every ship you have done... you would be nowhere near where you are now.

H.M.S. Superb will be a little lonely for a while but she will have company at some point although she will be getting a makeover sooner rather than later.

I think my problem is that I keep seeing so may museum quality looking models of ships of the period that occasionally I have an attack of ‘who am I kidding?’ It soon passes though!

The next five ships are well under way - five sets of masts and bowsprits were assembled today - and I hope to have them ready by the weekend.

You are of course right - rivet counting is contrary to what the collection is all about and it would have never have gotten as far as it has if I had done so!

Thanks for this little insight into your 'shipworks'. I really enjoy seeing your models and so look forward to the coming fifteen!
Regards, James

What a nice looking ship. It was clever of you to get Warbase to include the mast holes - I would not have thought of that and would have been drilling away, all out of alignment!

I built her a while ago but wanted her to hand as her masts were sued as a template for the five other ACW ships I am building. It is probably not one hundred percent accurate but it certainly looks the part!

Accurately drilling holes in MDF is a pain so getting Warbases to cut them out has been a godsend - along with the notch for the bowsprit!

Many thanks old chap! Some of the building techniques I use are quite easy to relate whilst others are less so - suffice it to say that a lot of improvisation and filing/sanding is usually the order of the day!

I would say that the masts are probably the most ‘regular’ of my techniques and with practice they are quite simple to build. You just need patience and proper preparation and above all time.

Five of the fifteen are well advanced and at least three of the final ten I can produce readily enough from my supply of building material. The remainder need some parts from Warbases which are currently in the queue for me.

It is getting there and it is a journey I have enjoyed immensely.