War in the Age of Imperialism 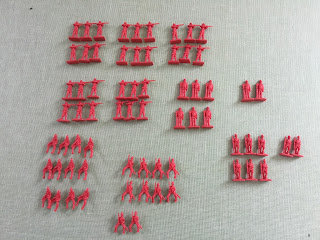 The selection of figures for one of the six combatants in the game. The other colours are blue, green, yellow, grey and purple. There are horses for the two types of rider included. The grouping into 6s and 4s is intentional and indicative of where my thoughts are heading! The above would serve as a small Portable Wargame style force in its own right.

You may recall my recent blog post in which I met up with Bob Cordery and took delivery of a copy of Eagle Games: War in the Age of Imperialism. This is a huge ‘Risk with resource management’ style of light wargame notable for two things - a huge map board and the 816 plastic pieces that come with it. Of these it is the 1:72nd (or close to) scale soft plastic figures that are of main interest. 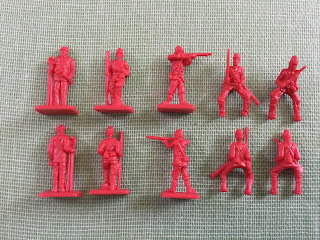 Front and rear facing views of the figures. The two types on the left are (in the game) explorers and engineers. The infantryman is obvious whilst the two riders are cavalry (the the carbine) and leaders (with a sword).

I finally got the chance to sit down and take a closer look at what was in the box and I am really delighted that I did!

Using the top picture as a guide you can see just how many useful figures there are in the game. To begin with there are 180 infantry standing firing - these are the overall totals of the six colours available - with 72 carbine armed cavalry and 60 with swords. Add in the 48 each of the explorer and engineer figures and 60 artillery pieces you can easily begin to see exactly why I was so pleased to come by this set.
The whole set up is crying out for imagi-nation style use and by dipping into the currently available ranges from manufacturers like HAT and others it would be really simple to add those specialist types one needs. For example, Hat produce a boxed set of British Zulu War command as well as artillery, wagons, and other bits and pieces. With some careful thought beforehand the contents of this game opens up a huge amount of potential for all manner of things Colonial related - as long as one was not too fussy about details of uniforms etc (which I am not!).
I have not worked with soft plastic figures for many years but now have something of a plastic mountain across the medieval, ACW, Colonial and WW2 periods so the time is nigh for me to start doing something with them. The big plus is that it is now a lot easier working with them than way back in the 1970s!
As a matter of some urgency I am now on the lookout for the ACW set and others from the range. As the foundation of a period specific set up they are really useful.

Wow, there’s loads to work with there old fruit. How will you deal with painting the bendy plastic? Something that always used to frustrate me with my Airfix lads.

Back in the day (early 1970s) I used to wash the figures in detergent, seal the figures with PVA, paint them using enamels and then gloss varnish them. Flaking was minimal and usually limited to swords and muskets.

Fast forward to some forty odd years and I am thinking pretty much the same method but with a couple of twists. The biggest change will be to use acrylic paint rather than enamel and probably one of those stain style varnishes for instant shading.

I am lucky to know a number of die hard plastic figure gamers so will be tapping them up for some ideas when I get to work.

The biggest challenge at present will be organising the opposition - needless to say I have a cunning plan for this!

There's a lot of fun to be had there David. I find with plastics, if prepared as you suggest, they survive quite well when they are based as this reduces handling. Pointy bits, like spears and bayonets may need the occasional touch up.

I look forward to seeing how this develops. Are you going for scarlet or khaki?

Hello there Bob The Old Painter,

To be honest I could easily do both! My thoughts initially revolved around the Zulu War but by taking a few historical liberties I reckon that Madasahatta circa 1900 could be in with a shout meaning Khaki.

The figures are basic and generic looking which suits me just fine and they fit in with things like Hat or ESCI style figures.

I now officially have a plastic mountain covering Medievals, Colonials, ACW and WW2!

Basing will certainly feature - for the reasons you mentioned.

The single sets of Red and blue figures I have I merely stood singly on slightly larger bases, and painted those bases green and paint the topi hats white. Left them at that. My original thought was to class the rifle-armed horse as mounted infantry and the sword guys as genuine cavalry. Since then I've come to a different organisation, with the sword armed horse attached to an all-arms corps, and the rifles belonging to specialist cavalry corps. The explorer guy became gunners, and the engineer guy could be gunner or military engineers. I left leaders out of the equation.

I found with these figures I could play out a small campaign in an hour or two, the table becoming quite a large tract of country, and the time scale 1 turn (IGoUGo) representing 1 day (or possibly even longer). So these figures never were incorporated among the similar period of what I'm beginning to call my 'Colourful Little Wars'.

They look really useful David….
I’ve tried some of the fancy ‘Plastic’ undercoats in the past… but I didn’t think that they made that much of a difference…
I have also heard that if you soak the figures in a bleach solution it helps keep the paint in place…I have however never tried this.
An acrylic varnish does seem to help as it is a more flexible coating than enamel or spray.

The beauty of these figures is that can do anything with them from your system up to a full blown shaded, highlighted ‘fancy dan’ style of finish. I really liked the idea you had with your ‘Shambattle-esque’ game and the rules looked great fun to use.

I will probably use the carbine armed horse as frontier style mounted infantry with the sabre wielding figures as cavalry. The Hat Zulu War British command set has some useful types t add to the rank and file including mounted officers which is hand. The explorers and engineer figures could serve as a number of things although I will probably get some dedicated gun crews.

I have absolutely no qualms about redcoats or khaki as required!

I am going to enjoy this but it is definitely for the second half of the year after I have finished the ACW!

Back in the day it was a coat of PVA then enamel paint and varnish. Acrylic paint has a better degree of flex in it and used with a the acrylic varnish (with a wood stain in it) should do the job nicely. I plan to base the infantry in 3s and the cavalry in 2s.

I am looking forward to this but it will be a while off yet. Besides, I need to plan exactly what i will be doing with it all!

I wash them in hot soapy water, a grease cutting detergent is best. Then I hand prime them with acrylic grey paint. I know a lot of people spray prime them, but I've found that when I did that they would tend to flake. I use acrylic craft paint, it's thicker and seems to hold up better. (It's also cheaper.) When you go to varnish do two coats a day apart and base your figures. I haven't had any problems when using this method and I use 1/72 plastic minis both for wargames and individually based for DnD where they are handled a lot.

A nice set of figures there David and they immediately take me back to my Airfix days and many happy memories. We never did paint most of our figures or base them, hence the paint flaking off with ease!

It is a very useful set for sure and with much in the way of potential. Having a single type of infantry figure offsets the usual problem associated with plastics of multiple types in occasionally lurid poses! These days managing the whole ‘flaking paint’ syndrome is a lot easier and so makes the use of these figures far less of a concern.

I already have a few figures jigged up to paint just to experiment with techniques.

The key thing is preparing the figures properly as you rightly point out. I want to experiment with a few methods before I settle on one but one big advantage of the figures I am using is that the ‘sticky out bits’ are relatively modest and therefore less likely to being occasionally bent!

I was wondering about single figures as I have this in mind as well so your double varnish point was well made!