Vicksburg is the Key 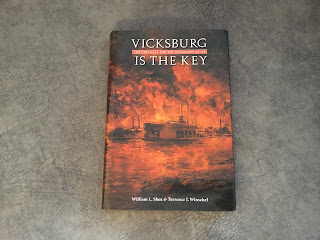 A very good overview of the campaign and siege of Vicksburg

Now that one of our domestic situations has relented slightly - at least temporarily - my headspace is feeling rather more willing to resume work on my ACW project. The first order of business is of course completing the ships but I have, in the meantime, been quietly researching the Vicksburg campaign.

Aside from the siege itself there is a whole raft of operations that provide plenty of ideas for gaming scenarios - both on the mighty Mississippi and its tributaries and on the land side. From the end paper of the book above you can see what I mean.

“The struggle for control of the Mississippi River was the longest and most complex campaign of the Civil War. It was marked by an extraordinary diversity of military and naval operations, including fleet engagements, cavalry raids, amphibious landings, pitched battles, and the two longest sieges in American history. Every existing type of naval vessel, from sailing ship to armoured ram, played a role, and military engineers practise their art on a scale never before witnessed in modern warfare. Union commanders such as Grant, Sherman, Farragut, and Porter demonstrated the skills that would take them to the highest levels of command. When the immense contest finally reached its climax at Vicksburg and Port Hudson in the summer of 1863, the Confederacy suffered a blow from which it never recovered. Here was the true turning point of the Civil War.”

Whilst I am not planning to replicate the campaign as such it will certainly serve as a great template for my own alternative version using the waterways of Essex as the theatre of war. One thing has come up on the naval side though - I will need to build some mortar rafts! 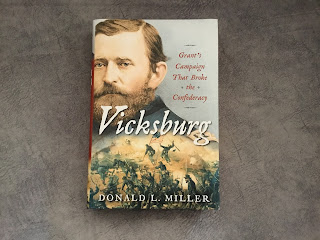 Looking forward to reading this one!

The land side will be covered using the block armies initially although I have some plans for something figure based in due course. A further addition to the library to support this project is the book you see above - acquired courtesy of some of the remaining balance of my birthday Amazon gift cards.

It has been a really trying couple of months but with the note of cautious optimism concerning Laurel as well as some positive news from Canada about her brother - obviously this is relative given his condition - the month has taken on a slightly rosier hue at last.

Long may it continue!

Good to see you having time to spend on your hobby after the recent travails. Good to hear some relative good news from Canada too.

I was looking over my notes and neither of those two names featured….until now that is!

It is nice to think about something other than hospitals, medical stuff and appointments.

No SELWG for me but SALUTE is on!

It is a pleasure to be doing something distracting once again! All in all things are on a much more even keel then previously and long may it continue!