Castles in the Air 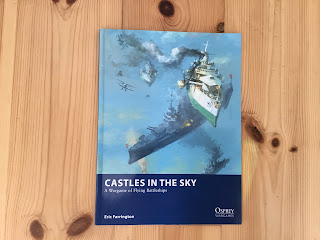 As part of my Father’s Day haul I picked up a copy of the newly released rules from Osprey - Castles in the Air by Eric Farrington. I have enjoyed Victorian Science Fiction based games for many years and ‘back in the day’ scratch built fleets of dirigibles for the Ottomans, Greeks and Bulgarians to use with Wessex Games Aeronef rules, I even co authored a campaign supplement for them - my counterpart hails from the Antipodes - featuring the Turks which was huge fun. 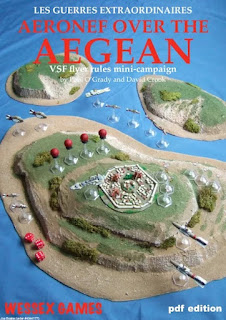 Available on the Wargames Vault I believe - it was a great collaborative effort!

I had a quick run through the rules and have to say they look pretty good. The mechanics are straightforward and one of the things I am intrigued about is the whole 3D aspect. Yes, you can climb and dive a battleship!

The background is OK although to me seems a little overextended in respect of the timeline. The ‘history’ picks up after the Martian ‘War of the Worlds’ invasion in 1872 and assumes that the alien technology used by the invading forces had been extensively picked apart and adapted for use by humanity culminating in the use of the Air Screw as a means of of power and lift. This is then run up to 1914. From a personal choice I would have preferred to have stuck with the pre dreadnought era but them that is just me!

I am certainly keen to try these out although initially it did present rather a dilemma. I want to build pre dreadnoughts but I also want to tackle similar on a VSF style footing. I am not keen on building two sets of models though - yes, I shall be making some for this - so will stick with the planned pre dreadnoughts in due course, but with a twist.

When I get to the pre dreadnoughts I plan to also build some flying bases to go with the models. These bases will consist of the stand itself and an entire lower deck assembly featuring lift/steering vanes and the air screw. The idea is that when I want to take to the skies all I will need to do will be to place the ship model on such a base and Voila! An instant flying battleship!

It is with this in mind that I am accelerating my plans for the design of the bits and pieces I shall need from Warbases to include some sabot lower hull assemblies.

I reckon that is two gaming experiences for the price of one which is pretty damned clever in my book!

I just got my copy today, and it looks like great fun. I agree with you about the time line though and I'm thinking of scrapping the Martin idea and going with a made genius inventer, maybe Jules Vern...

When I saw that book I definitely thought of you…😁
The sabot flying base is an excellent idea.

It certainly looks like fun and I am looking forward to getting to it at some point. First things first though - ACW ships and the ironclad rules - these have been neglected somewhat recently and I need to rectify this!

You know me so well! I thought it was quite a novel idea but one that would remove the need for building models for two types of game.

I do have the odd idea and some of then are not too shabby!

Nah, you will be building new airships soon enough, but it looks like a lot of fun. Looking forward to see how this develops.

I do have some previous with this in that I scratch built a load of Turkish, Greek and Bulgarian armed dirigibles using 1:72nd and 1:48th scale aircraft bombs. All I did was to add some superstructure, funnels, the odd turret and naturally a mast for the national ensign and voila! Instant VSF air fleets.

The rules do look fun though so I may succumb sooner rather than later!

David -
I once had the idea of a world in which it was discovered that there was a gas, phlogiston (you might have heard of it), that had negative mass and therefore negative weight. This was found when some proto-scientist discovered that upon burning, the overall residue of the burnt material was heavier than the original material.

I must admit that when discussing the whole idea of flying battleships that a certain degree of disbelief is required - that and a scientific sounding explanation of how and why! There are any number of science fictional rationales to choose from and certainly why not phlogiston?

On the ‘upside down’ angle my only observation is that these airships appear to be incredibly vulnerable from the underside so at the very least I would expect to see some provision for point defence style weaponry. I had half an idea of a monitor style vessel with two main turrets - one in the usual place and the other directly underneath on the lower hull - something like the ball turret of a B17.