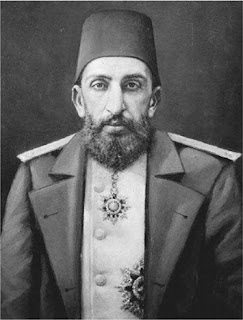 It was well known that Sultan Abdul Hamid II did not enjoy a good relationship with his naval high command. Aside from mistrusting his admirals he considered the navy to be drain on the treasury and so, after the poor showing during the recent war with Russia giving him the excuse he needed, he resolved to keep the fleet effectively bottled up in the Black Sea. The Sultan, whose paranoia knew no bounds, was convinced that the naval hierarchy was plotting against him and so, in order to avoid the fate of his predecessor, he made sure that it was under resourced, underfunded and undermanned. In the long term this proved to be a mistake as morale, never high to begin with, eroded away and the fleet, once one of the most powerful in the world, was allowed to fall into decay.

Recently Turkey had been deprived of a number of ships that were being built in England and compulsorily purchased by the Her Majesty’s government as a result of the threat of war with Russia. Although war with Russia was avoided tensions remained high and continued to do so when Russia commenced operations against Turkey. Unfortunately any sympathy the British may have had for the Turkish cause in the face of the Russian’s abject bellicosity had quickly evaporated in the face of several well publicised and unsavoury incidents undertaken in the Ottoman Balkan provinces and so when the ships were appropriated and taken into the Royal Navy it was widely seen as a good thing, except of course, in Turkey.

The war with Russia went badly for Turkey and so at the conclusion of hostilities the British finally realised that Russian gains at the expense of the ‘sick man of Europe’ could potentially threaten the Suez Canal, not to mention the ongoing situation in Afghanistan. Great Britain reacted as only she knew how and so immediately sent the Mediterranean squadron towards the Black Sea as a show of force to remind the Russians of exactly who ruled the waves and this was undertaken with scant regard to Turkish sensibilities at the infringement of her sovereign territory. 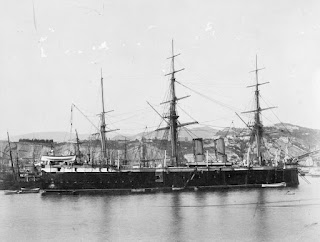 The Royal Navy Mediterranean squadron, under the command of Vice Admiral Geoffrey Hornby and consisting the ironclads H.M.S. Alexandra (flagship), H.M.S. Agincourt, Achilles, Temeraire, Sultan, Swiftsure and Superb and the despatch vessel H.M.S. Helicon, entered the Sea of Marmara, despite Turkish protestations to the contrary, and anchored. Shortly after their arrival word reached the admiralty that the Russians were planning an attack against the ships of the Mediterranean squadron under the cover of night using torpedo boats (mostly of the spar variety although some locomotive versions were available). The British responded by sending a sternly worded note to the Russian ambassador in London and telling him, in no uncertain terms that any interference with Her Majesty’s ships would be deemed an act of war. The Russians promptly backed down and abandoned the idea.

The treaty of San Stefano, whilst unsatisfactory in many respects meant that the Royal Navy squadron, its work largely unfinished, made ready to return to Malta but not without a small problem. H.M.S. Superb, the sister ship of the Turkish Mesudiye, developed an issue with her engines and so was unable to leave with the rest of the squadron.  Political expediency required the British ships to leave promptly so the decision was taken to leave H.M.S. Superb behind to make her own way back as soon as she was ready. By dint of her crew working through the  night she was at last able to raise steam at dawn and so set off on her own at best speed to rejoin her squadron. She was at least sixteen hours behind.

Despite the generally poor showing of the Turkish navy during the recent war there were some elements that tried to stem the slide into decrepitude. A small ‘band of brothers’, chaffing under the grinding rule of the Sultan and burning with shame at their perceived ineffectiveness, decided that a demonstration against those forces that deigned to encroach on the territory of Turkey with casual impunity, would be order. The situation in respect of H.M.S. Superb, alone in the Sea of Marmara, seemed like too good an opportunity to miss.

A plan was quickly hatched to intercept and capture, using force if necessary, the British ironclad or if unable to do so then to ensure that she would not leave Turkish waters. This was to be undertaken without the knowledge of the Sultan (although in his name) and if successful would restore the prestige of the Turkish navy and demonstrate to the Sultan the value of maintaining a strong fleet. It was a noble and patriotic thought to the loyal officers and crew of the three ships tasked with this dangerous undertaking. The great unknown was of course the reaction of the British to this enterprise - it was a gamble that the British would not want to go to war with Turkey whilst attempting to hold Russia at arms length.

The Turkish navy in the Sea of Marmara routinely spread the ships around a number of small fishing ports and harbours, often barely sufficient for a single warship to dock. Facilities were often very basic and re supply of coal, ammunition and other supplies was at best tenuous. In spite of these operational challenges a plan was hastily improvised and agreed upon by the captains of the three small ironclads that were to attempt this daring mission. Overall command was assumed by the senior of the three captains, an experienced and seasoned Captain by the name of Ali Shuar. 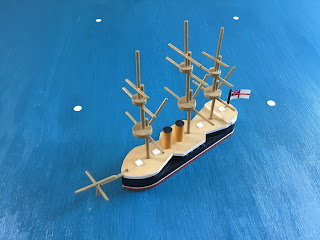 H.M.S. Superb. Originally I built this model as a kind of experiment - just to see how far my building technique would work. She is the largest model I have built and if I am honest I am not entirely happy with the paint job on the masts and the funnels so these will be redone at some point.

Binbasi (Captain) Ali Shuar was careful and prudent seaman and had served with relative distinction under Hobart Pasha in the Black Sea during the recent war with Russia - one of the few to do so. He was familiar with the Mesudiye - the sister ship of H.M.S. Superb - and so was not confident that his small command would fare well in a straight fight due to the overwhelming superiority of the British ship’s artillery. Manoeuvre would be their best hope and so his plan was to engage the great ironclad from the bow and the stern where possible, so as to neutralise the enemy firepower advantage. With this in mind he split his force into two - in actuality he had little choice given that the ships were separated geographically , his own ship was some miles further along the coast from the others. The two sister ships - the Feth-i-Bulend and the Mukaddeme-i-Hayir would operate together whilst his own ship, the Muin-i-Zafer, would work independently. He hoped that by having a range of targets the effect of the British ships broadsides would be reduced. With the minimum of fuss and surprisingly well organised, the three Turkish ships raised anchor and headed out to sea. A short while later the three ships rendezvoused and moved into formation with the Muin-i-Zafer taking the lead and stationed some distance ahead. 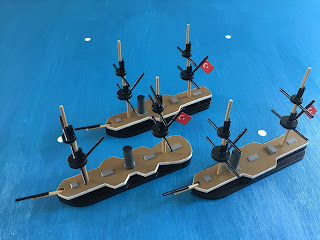 The Turkish flagship the Muin-i-Zafer (bottom left) flanked by the Feth-i-Bulend (top) and the Mukaddeme-i-Hayir (bottom).

Ali Shuar’s plan was to get as close as possible to the stern of the British warship and then he would take his ship starboard whilst the others went to port. Taking advantage of the sun being in the east would help to mask their approach until they were in position to force a conclusion. It was a gamble to be sure but under the circumstances probably the best course of action. He expected to make the interception at around 9am.

Aboard H.M.S. Superb the atmosphere was tense although her commander, Captain Archibald Bellend, appeared to be supremely unconcerned about the situation his ship was in. Thus far the ship had been making good progress following her repairs but the entire crew down to the lowliest stoker were of the opinion that the sooner they rejoined the rest of the squadron the better. Captain Bellend had a low opinion of the efficiency of the Turkish navy and was confident that they would not dare to impede his progress in any way. His senior officers did not share his optimistic appraisal and so the ship was quietly cleared and readied for action. Her Captain believed that it was all quite unnecessary but he allowed himself to be persuaded and besides, it kept the crew occupied. He stood calmly on the quarterdeck, hands clasped behind his back and with his chest and jaw firmly set when a cry from the lookout, squinting into the dazzling morning sun, disturbed his reverie. “Smoke off the starboard and port bows!” 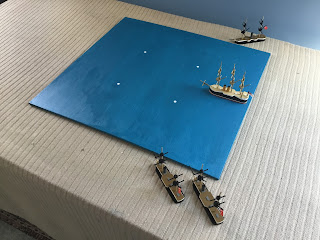 The Turkish approach had been flawless and brilliantly executed. Without being noticed they had arrived exactly as expected and had managed to get slightly ahead of the British ship and on either beam of her. All three ships were cleared and readied for action and so surprise was complete.

Captain Bellend stood in stupefied shock at the brazen temerity of the Turks as their ships loomed into view. Taking the situation in at a glance he immediately ordered an increase in speed and prepared to engage. With a strident crack one of the forward 20 pdr BLRs opened fire against the leading Turkish ship. Battle was joined….

Having just been discharged from hospital, this was a great blog post to read when I got home.

Your model - as usual - are superb … even HMS Superb, I look forward to seeing how events unfold, although I suspect that Captain Bellend may well have miscalculated the situation he has landed himself in.

Welcome back! I am pleased you enjoyed it and thank you for your comment about the Superb. I need to get the colours right as I want to have the standard set up for when I build the rest of the squadron.

As for Captain Bellend, well, we will see how his opinion of the Turkish navy plays out…..

All the best and delighted to have helped!

Thank you old chap! Captain Bellend is firm believer in the ‘ If nothing else works, a total pig-headed unwillingness to look facts in the face will see us through’ school of naval tactics and so should either be decisively triumphant or ignominiously defeated - there were unlikely to be any shades of bland mediocrity!

It is a rather crudely disguised historical scenario but is one of my favourites and will work well for this.

Great looking toys David… as always.
I’m looking forward to seeing how Bellend does… maybe he will be glorious and victorious and we will see further adventures.

Captain Bellend is very well connected and so should he survive I am sure flag rank and further adventures will undoubtedly follow. Rumour has it that he has been earmarked as the commander of the naval forces for the annexation of Madasahatta…..