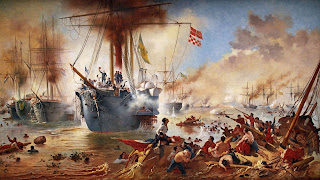 The Battle of Riachuelo during the War of the Triple Alliance

Now that the ACW naval project is gradually winding down I am able to at last really think about what comes next. Regular readers of the blog will no doubt recall several ideas cropping up and in truth, there is a pleasing smorgasbord of potential conflicts to explore from a naval perspective. I suppose in many ways the key thing I have borne in mind with all this ‘mental meandering’ is the need for what would be a different style of tactical challenge. The ACW offers everything from river based gunboat skirmishes to high seas ‘runners and raiders’ with coastal actions thrown in for good measure. In short it is replete with potential and indeed, one could game the ACW afloat exclusively and have a very rich and longstanding seam to tap into.

The War of the Triple Alliance and the later War of the Pacific both have much to commend the naval wargamer. The forces are relatively small, the ships are an interesting mix of purpose built warships and converted civilian types, ironclad, wooden vessels, screw and paddle wheelers are all in evidence. There are river based actions for the former and largely coastal for the latter. Between the two wars you have pretty much everything that the ACW had in terms of variety of gaming potential.

David Manley has produced an outstanding supplement for each of the South American conflicts - there are even counters for the ships featured - which include a complete campaign system as well as potted histories of the wars, scenario ideas and ship specifications so pretty much everything you need is to hand. He is even designing STL files of the major ships for those of the 3D printing fraternity. In short, these are essentially the complete package for the would be gamer in the period.

3D printing is not an option for me as my shipbuilding is firmly wedded to the use of lashings of MDF, cardboard, bamboo skewers and wooden cocktail sticks!

I am keen to explore both conflicts but I have this nagging feeling that for the moment they are rather too close to the ACW in terms of gaming. I am conscious of the fact that perhaps I need a bit of a change especially if I am tackling another naval project. Having said that many of the ships from both wars would be easy enough to build but in the cold light of day I am unsure if at his stage I want to. It would feel very much like making the models because I can rather than because I should. The same could also apply to the Boshin War - I am keen to tackle this but again, would it feel a little too similar to what I have been doing for the past two years or so?

The same could also be said about the Russo-Turkish War up to a point.

All four of these conflicts will get their fair share of attention in due course but for now I really need a change of tack.

I want to maintain the ship building enthusiasm because I enjoy the whole process of turning a picture or a plan into a model that looks similar to the original, more or less!

Winding the historical clock backwards one of course hits Age of Sail territory. From the time of the Spanish Armada up to the Napoleonic Wars there is plenty of potential and again, I have enough model building ideas for a couple or three projects. This will require more time and effort to organise compared to the later options I have in mind.

Winding the historical clock forwards a few decades then we have my yet to be finalised ideas surrounding Madasahatta circa 1900 or even East Africa during the Great War - Lake Tanganyika and the Rufiji Delta. These are suitably different enough from the middle years of the 19th century to be worthy of serious consideration and besides, I rather fancy tackling something a little later.

For now though, I shall concentrate on finishing the ACW models so work will resume in earnest as soon as the Warbases order lands.

Hi David -
I can relate to your conundrum, as something similar has occurred to me in respect of my Chromatic Wars ... thingy. Having built as many naval vessels as I want to for my 'Blackland' (Balkan) wars, I find I am in no all-fired rush to carry on with fleets for Ruberia (UK) and Azuria (France). Such fleets ought to be at least as large as the Turcowaz and Hellenic fleets, and several consideration rather gives me pause.

Mind you, I still have my 'Age of Imperialism' squadrons and may simply use those. Or I can rope in my 'Jono's World' fleets - minus the aircraft carriers... A fourth option is to build large fleets of ships along the Jono's World lines (max length 6cm), but of the pre-dreadnought era. Rather like Bob's pre-dreadnought chappies, although I don't recall what size his vessels are. Reasonably sized fleets shouldn't take too long... I have plenty of balsa wood anyhow...

An inspirational read of a 19th century Russia-Afghan war games clash has reawakened an idea of a Kavkaz Kampaign, which might involve small fleets of Czarist and Sultanish squadrons... H'mmm.

I must admit that the prospect of building a whole pile of ships that gaming wise are going to work in a similar way to the ACW collection had me questioning the whys and wherefores! I will certainly get to these conflicts at some point but at the moment I just feel in need of a naval change.

The late 19th century Colonial style naval (think Madasahatta or ‘sending a gunboat’) appeals as does the whole East African Great War vibe - I have even thought about something China river based….

For now though the ACW remains front and centre and no doubt I will change my mind several times before settling down on what comes next! I am pleased that I am not the only one with this problem though….

All the best and know that I share your pain!

I think as wargamers, we tend to "go back and forth" when deciding our next wargaming period based on the pros and cons of each period we are considering.

In my case, I'm deciding between Ancients using Strength and Honour rules (2mm figures), ECW (10mm) and Napoleonics (10mm). I get real thrilled about one of these periods and then my interest changes.

I'm leaning toward Ancients using Strength and Honour rules. That way, I can try the rules by printing out the unit bases from PDF files you can buy from Too Fat Lardies. That way, I don't have to waste time painting figures if I don't like the rules.

Also, I still am burned out from figure painting. For now, I feel I can paint 3mm units for a small ancients battle should I like the rules. I don't think I can paint hordes of figures for ECW and Napoleonics.

Good luck with your next wargame project.

You are quite right about that for sure - certainly in the case of the South American naval wars I want to game them but for now they just feel a little too similar to elements of the ACW. I will get to them at some point but for now I want to tackle something different.

I would not say I have reached being burned out from ship building per se, just burned out with ironclads and paddle steamers!

Onwards and upwards in any event!

Funnily enough I have been looking long and hard at 3mm as well.

There is plenty of mileage in the period 1860 to 1880 so I would never be stuck for models to build and battles to be fought but I fancied doing something later for a change of scenery so to speak. David Manley’s Steamer Wars are a great set for what. Have in mind although I shall be looking at a few slightly larger vessels….

The Great War of 1896 would be attractive but would require rather more larger ships than i am looking at building. At the movement anyway….