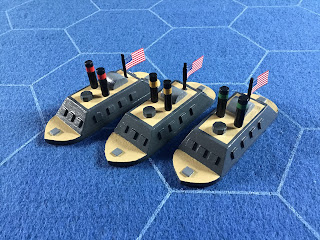 U.S.S. Carondelet on the left, U.S.S. St.Louis in the centre and the U.S.S. Louisville on the right - the traffic light flotilla….

Partially inspired by Boy George and Culture Club and their hit single Karma Chameleon I present the trio of City class ironclad gunboats sporting funnel bands of “Red, gold and green….red, gold and gree-ee-een…!” Well the video was based on a riverboat set during the 19th century so it had a certain whimsical appeal to me…. 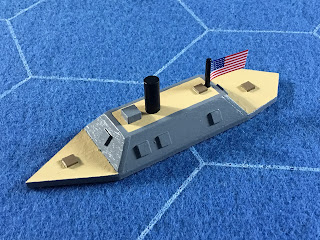 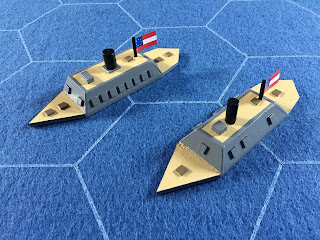 The C.S.S. Mississippi and the C.S.S. Atlanta 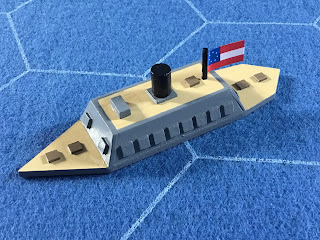 The C.S.S. Mississippi - once again she was underpowered, incomplete and eventually burned to avoid being captured by Union forces. Her very existence, along with the C.S.S. Louisiana, influenced Union strategic thinking as their deterrent value was substantial

On a more serious note the above trio of ironclads have also been commissioned. A brace of the C.S.S. Atlanta - one with each flag so the Union get to use her as well (and they did!) and the C.S.S. Mississippi - a rather large casemate ironclad being at the same time as the C.S.S. Louisiana. The brace of Atlantas still need to have a spar torpedo assembly fitted.

Next up are three more fully masted types before we head back down into gunboat territory and the final brace of ironclads - a pair of C.S.S. Tennessees, one for each side.

I think we’re going to need a full sail past of both fleets when (if) you are eventually done!

Funnily enough I was thinking that might be a good idea once the book is out. I have reached a pivotal point in that the completed ships have now outgrown the two boxes assigned for storage.

All the best mon ami,

The title made me chuckle David and not for the first time too! Lovely models as always:).

I don't know why but remembering that steam boat video coupled with the funnel band colours and the rest as they say, is history….

Thank you for comment re the models - much appreciated!

Looking great mate - quite the Fleets you are amassing there Admiral!

I am calling a halt at 72 models for the time being although there are a few I am still looking to build in due course. I have a couple of other ideas in mind so watch this space….

Hope all is good with you and the family!

More of you lovely models David. The fleets must be getting quite expansive now. Looking forward to a sail past, as the Jolly Broom Man says.
Regards, James

Splendid…as always.
I’m with JBM… a sail past would be jolly good.
Or even a video accompanied by appropriate music 😁

Thank you kindly sir! I will be calling a halt at 72 for this phase of the project so that going forwards I only need to drop in the odd additional model as needed. I will certainly do a fleet review post once I hit the six dozen.