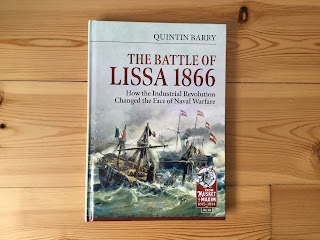 A welcome addition to the library and possibly the inspiration for another project? You may think so….I couldn’t possibly comment…. :-)

When I first saw the above book advertised my curiosity was naturally piqued! It is very much a book of two halves in that the first is devoted to the evolution of the ironclad warship including the introduction of steam engines, shell firing artillery and armour spanning the period from the end of the Napoleonic Wars via the Crimean War and the ACW up to the battle of Lissa itself. The second half covers the Italian and Austrian fleets and the campaign and battle itself.

Needless to say for this period the indefatigable David Manley has published an excellent set of rules and a campaign supplement for Lissa - the rules are called Broadside and Ram and are a step up from Dahlgren and Colombiad in that they are designed for fleet level actions rather than lower level.

The prospect of building the fleets for this is a tempting one but to be frank I am quite close to being ‘ironcladed out’ so will pass on it for now - but it may feature at some point and in a different way from the ACW project.

So….back to the models and writing!

David -
I imagine ot will be an interesting read! Austria is not a nation one generally associates with having a blue-water navy, so this victory over the Italian is really something!
Cheers,
Ion

Shallow knave that I am, I would simply use the ACW ships to game this battle if at all possible. Not sure if you could of course, but worth a try?

Have you seen the post card from Lissa wargame rules? Also Junior General covers it and has some nice card counters.

So far it has been a very good overview of the development of the ironclad warship in the decades leading up to Lissa.

I know what you mean about Austria although their navy that grew into the WW1 version was quite an efficient set up and had some interesting ships. For a country without a long tradition of seafaring and with a newish and developing industrial capacity she managed reasonably well.

Up to a point I could but there were quite a few ships carrying a full sailing rig which the ACW collection does not have nearly enough of. Fastidious mortal that I am there is also the question of the flags although I do have sheets of Austrian and Italian flags waiting in the wings….

I have seen them but do not have a copy. I have also seen the splendid Junior General set up - the trouble is that I get too easily distracted whenever I look at there site!