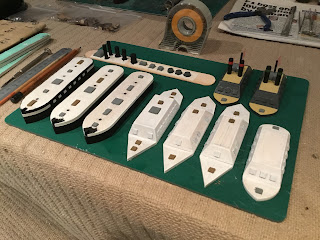 From left to right there is a frigate, two sloops, the C.S.S. Mississippi, a pair of C.S.S. Atlantas and a City class ironclad with two painted sisters at the rear, awaiting their new pilot houses. The wooden strip at the top of the picture contains the funnel, pilot houses and the paddle box for the City class. These are mounted on double-sided tape for ease of handling whilst being painted.

No, not the film - nor the Samurai version, magnificent though it is! I am of course referring to the seven models in the picture above. These seven models, once completed, means that there are eight left to go of which four are next under the brush, three are under construction and one exists as an idea!

I was able to get the hatches painted and also the hull white lining on the two sloops but time ran away with me in respect of sealing the masts. No matter, I shall attend to them tomorrow, along with the decks. There is a fair amount of work remaining as far as painting is concerned but it is all manageable and more importantly, I am looking forward to it.

Who would have thought it? Me looking forward to painting something….

Your ACW fleets must be getting very sizeable by now! Fantastic!

Once the final 15 are finished (which includes the 7 in the picture) I will have 70 built. Originally it was planned to be a dozen or so….

It is a motley collection in many ways as there are some generic models, some purely representational types and a smattering of vaguely historical looking efforts. They all work together well on the table top though, which is the main thing!

The funny thing is that there are several other models I want to build for the collection but they will be for the future and as and when needed. I still want to build but something other than for the ACW.