"A Pirating we will go!" 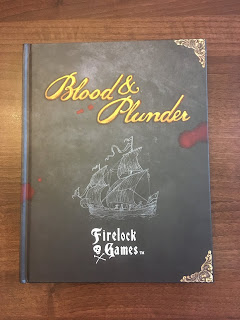 The rules look pretty good and the supporting figure range is exquisite. I may dip into this for the odd personality figure but to be honest the Foundry range covers pretty much everything I am likely to need.

As the former Prime Minister Harold Wilson famously said back in 1964, "A week is a long time in politics" - I do not believe he was a wargamer but if he was then he could have also easily have said that, "A week is a long time in wargaming." You may be forgiven for thinking that I am suddenly knee deep in Conquistadors and busily planning what opposition I shall be using for the Portuguese - this is partially true - but there is of course another side to the coin, or rather another side of the collection I took delivery of.

Pirates. In truth the pirates will see the light of day before anything 16th century comes along (assuming I have not gotten bored and disposed of them - one never knows!) and so I have been spending some time thinking about how I am going to tackle this from the perspective of forces raised and how I will use them. The former I have largely settled on and unsurprisingly it will entail some modest expenditure but the latter has given me some wonderful choices in respect of the rules I will be using.

To begin with all the figures will be individually based which opens up using the Rampant series by Dan Mersey. There is also the option of using Pieces of Eight by Peter Pig but replacing the 15 mm multiple figure bases with single 28 mm models. There is another set of rules I want to take a look and these are On the Seven Seas by Chris Peers, published by Osprey.

I had heard of Blood and Plunder but had not gotten around to taking a look at it. This oversight has now been rectified! The book is a large A4 sized hardback of 164 pages. There is plenty of eye candy in support of their figure range as well some welcome historical detail. An entertaining game can be had with a couple of dozen or so figures a side which is ideal for me. Another option for the period would be to take a look at Donnybrook which I know is a particular favourite of the late 17th century chapter of the infamous Postie's Rejects (he will know who I mean!).
Posted by David Crook at 09:14

This takes me back to 'Legends of the High Seas', which was a fun pirate based game. Like so many rulesets it was soon supplanted by the next fad, which was a shame as it was a good game.

I must confess to not knowing about those particular rules. I will undertake a little google fu and see what I can find.

It is true about rules replacing rules and often, as you rightly point out, not in a good way. General Quarters 1 and 2 is another good example as I really do not like GQ3!