My ACW Collection - The Foundations 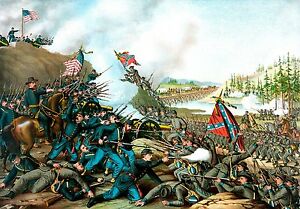 A Kurz and Allison print of the Battle of Franklin, 1864

First of all the biggest news surrounding this project. The balance of my Spencer Smith 30mm ACW Kurz and Allison/Old Toy Soldier inspired figures arrived yesterday and boy, oh boy are they something special! I need to base them before they get their blog post review and this will taking place over the next few days. There is 116 foot, 24 mounted and 6 guns in all - the foot and horse will be mounted on individual bases whilst the guns will be free standing. the artillery component seems rather large for the number of figures - especially when you consider that there are only 12 gunners in total, 6 for each side - but bear in mind that his collection is replicating the components of the board game Battle Cry. If I was using the maximum amount of artillery in a game then two gunners per piece would be in order (the same as Battle Cry and the Portable Wargame), if using two guns then the crews can be three figures and a single piece could have four - one has to be mindful of the aesthetic appeal after all....

As befits the basic, even crude, nature of Spencer Smith figures opting for a glossy, old toy soldier style paint job was a no brainer. You will have to take my word for it (at least until the bases are done that is) that they look lovely and I am so pleased with the end result. Again, full details will be forthcoming on the appropriate blog post.

Supporting the figures and ship models I have quietly built up a modest library of relevant titles but one must be mindful of the fact that the American Civil War is covered by the written word on a truly epic scale and the real difficulty is picking out what not to buy rather than what to buy! As a rule I tend to take a high level overview of the subjects I am interested in but will drill down further into a specific area if required. Whilst I fully applaud and admire those hardy souls that can quote to the day and specific regulation when the lower cuff button of the Umpteenth Foot's officer's mess jacket changed that level of detail is usually way beyond my level of attention!

For the Civil War the library looks something like this:

For uniforms there is a very good section on the ACW in the Encyclopedia of 19th Century Uniforms which is very handy..

The above selection is very modest indeed and for sure I will add to it but only on a selective basis. I would be keen to explore anything in connection with the War in the West, especially anything river based as well as the campaign leading up to the fall of Atlanta and the 'march to the sea'. I would also like to expand the naval section where I can.

The important thing though, is that I have a solid core of books to be working with in the short term.

The games I will be playing with the collection will be Command and Colours/Portable Wargame based with the occasional foray into A Gentleman's War and Rebels and Patriots. I also envisage using the figures as units on a campaign map for when a strategic game takes my fancy so my recent acquisition of A House Divided has assumed even greater importance in the overall scheme of things.

From a practical perspective I need to think about some suitable terrain and of course a playing area. I am torn between investing once again in some Hexon or getting a dedicated gaming mat - neither of which are cheap options. An alternative will be to hex grid one of the GW playing mats I have using a permanent marker. Laborious but cheap to do and with the advantage that the off cut section could be cut into hex sized terrain pieces. I also need to think about ships. Realistically I can see me making around a dozen models - fifteen at the most - and these will be generic types rather than detailed historical models. I have already mentioned that these will be larger than my previous efforts - I am working to 5.5" grid - and that I plan to make them usable for both sides as required by the simple expedient of having interchangeable flags.

This modest collection of figures will enable me to fight wargames up and down the scale from strategic down to skirmish level and the realisation of this fact has given me much to ponder for my future endeavours.