Return to Madasahatta and a question.... 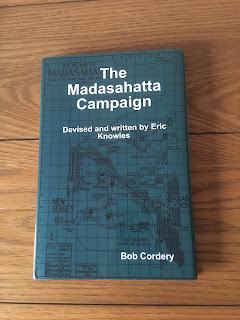 One of the things that Bill and I discussed at length over the course of his last visit and numerous phone calls was the fate of Eric's collection for the legendary Madasahatta campaign - elements of which have been recorded for posterity by Bob Cordery. The above is available from Amazon and Lulu so check out Bob's blog to find out more.

Bill has been a little undecided about this part of his father's collection - should he keep it or should it go? Well after the aforementioned discussions he has finally decided the best course of action and that is that I shall be the custodian of the collection and hold the same in trust. This will include not only the painted elements of the army but also some of the custom built terrain that Eric used. At this stage all I need to do is to sort out the requisite storage space in the man cave prior to taking delivery.

Bill believes that not all the collection is in his hands, raising the tantalising question of where the rest of it may be. Only once he has extricated the models from the umpteen boxes in his loft will he have a clear idea of what remains. I recall seeing some unpainted models that had been earmarked for some of the native elements that featured in the campaign when Bill first showed me the horsebox full of material late last year. I hope that sufficient is left to be able to be used in some way - we have no idea what figures he used although as I recall the British may have been late Colonial types rather than wearing shorts. We shall see comes to pass and naturally I will post on the blog in due course.

I am hugely honoured to be taking custody of this collection as it represents a piece of my personal and wargaming history (and would for a good few others if truth be told) and it was hugely influential on how I try to do what I do in my games. 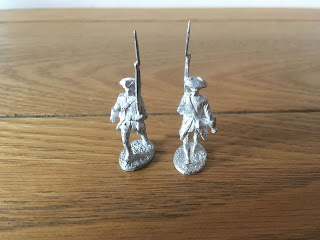 Large 25mm (closer to 30mm in fact) and exquisitely detailed

The question part of the title of this post refers to the rather lovely figures you see above. Eric raised a couple of infantry regiments of these, complete with command and grenadiers, and also a rather nice mounted officer that is a one piece casting. I believe these may well have been Hinchliffe (Connoisseur?)  originally and eventually morphed into RSM.

I shall be undertaking a full count over the weekend and so will get some pictures of the rest of the figures and the all important headcount.

If anyone can confirm who these are by I would be grateful.

They were originally marketed in the UK as Pax Britannica - sculpted by the late Steve Hezzlewood. Hezzlewood also sculpted the Hinchliffe X-range figures.

They are now available from the Dayton Painting Consortium in the US who run a reliable service.

Many thanks for the heads up with these - I had no idea about the Pax Britannica angle. I will check out the DPC website. As mentioned Ithere are rather a number of these in Eric’s collection and they look really business-like.

Many thanks once again and all the best,