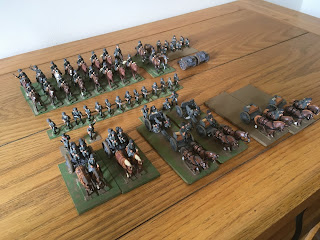 The great sort out of Eric's collection continues with the recently delivered 20mm WW2 collection taking centre stage although the 18th century has not been forgotten.

Both the Germans and the Russians contained a portion of painted figures - you may recall my mentioning that this has been a feature of Eric's WW2 collection - with have been separated out and will be heading to their new home in due course. Eric seemed to used units as 'works in progress' so it appears to be quite common for him to have a box of figures or vehicles etc with painted and unpainted elements housed together. The opposite was true for the 18th century kit as all the unpainted stuff was kept away from what was ready to use. Thinking about it there is a kind of logic in this in that most WW2 units tend to be smaller and more sub unit focused than the regiments of the 18th century. Adding a platoon here or there for a WW2 set up - especially in the Rapid Fire world - is usually a darned sight easier that whole companies or battalions!

In this part of the collection (bearing in mind this is probably only quarter of the whole thing) Eric had organised a late war German Fortress formation, complete with support, a German cavalry unit that could operate throughout the war, a horde of Russians (including Partisans) that could serve at either end of the war including support, an American late war armoured infantry unit with support and finally a late war Japanese infantry formation. In each case there are no model guns or vehicles as these were organised separately by Eric and are probably in with the models I have yet to receive. 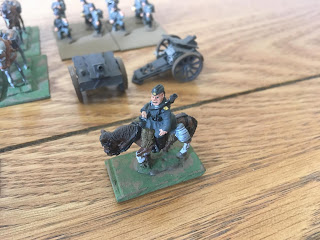 A rather portly German NCO.... 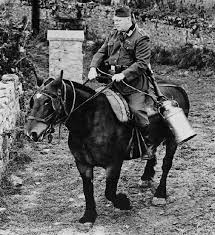 ....and the 'real' thing portrayed by Gert Frobe in the D Day epic, the Longest Day.


The painted cavalry you see in the picture above has roughly the same again unpainted and still in unit sized bags. As mentioned they will be heading off to their new home in due course. Coincidentally, at least as far as the figure you above is concerned, I had been watching The Longest Day over the course of last week in which Gert 'Goldfinger' Frobe appeared and upon whom the rather portly NCO is modelled on. Bob Cordery also mentioned that this figure was based on the German actor and that it had been used in numerous games of Megablitz as a supply marker.

I rather like the infantry guns Eric used as well for the supporting artillery.
Posted by David Crook at 16:47

Excellent stuff! I can sympathise with the "Work in Progress" syndrome.

I was very interested in what Mr Knowles made of his cavalry. Years ago I picked up quite a nice job lot of German WW2 cavalry, but it has yet to see action, or even to receive a proper organisation.
Cheers.
Ion

My wargaming career seems to been an ongoing work in progress but I suspect we are not alone in that!

Eric left extensive organisational notes for the cavalry - I believe he used Rapid Fire or something similar - which I will be scanning in due course. Email me on roguejedi@btinternet.com and I will send you a copy when I have them ready.

Very handy for recce purposes and chasing down partisans possibly.

He is a splendid looking fellow and no mistake!