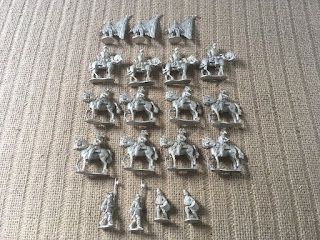 Ignoring the mounted one piece castings (Hinchliffe) and the bottom row of figures (RSM) does anyone have any clue as to the identity of the standard bearers along the top of the picture?

I am now down to around three crates of figures from Eric's late 17th and 18th century collection - and this is where things start to get a little interesting! 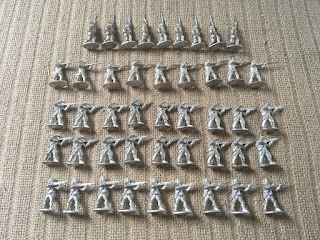 Ignoring the top two rows (RSM) of figures I am keen to identify the manufacturer of the bottom three rows of figures. They are dismounted cavalry and I have a feeling they may possibly be RAFM but I am really not sure.

I have identified most of the manufacturers that Eric used but there are some figures left that have thus far defied all attempts for me to identify them. When Eric organised his figures into units he always filed the underside of the models base for basing purposes. Naturally this is where most figure manufacturers stamp the identity code and even a version of the company logo. None of the figures above have any identifying marks (except where noted).

I rather like the mounted one piece castings that Hinchliffe produced but these, as are the rest of the figures depicted above, are still for disposal.

If any readers of my blog have any clues about the identity of the figures mentioned please let me know - I suspect that this will not be the first time I write such a blog entry either!
Posted by David Crook at 08:47

Morning David,
I actually have a battalion of French SYW with these exact standard bearers in them.The infantry are 'at rest' with their hands resting on their muskets.The grenadiers resplendent in fur caps are in a similar pose. I think they are earlyish Mini Figs. Amazingly all the bases had been filed back to help base them.I do like the unit even if its smaller than my other units. I have a few spare officers if you decide to keep the standard bearers who are a bugger to paint but look great.

I rather like the standard bearer although I can see the painting dramas that would ensue! I am not sure about the Minifigs angle as they look very stylistically different in my opinion and I am note sure if they ever produced cast on flags.

I have no plans to keep them as they are in the disposal list.

Like I said David the numbers have been filed off their bases prior to painting. They are rather nice figures and look great in a unit.