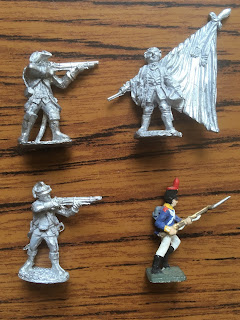 The two figures on the left are obviously dismounted dragoons - there are around two dozen of the chap at the top and a dozen of the fellow on the bottom. Three of the standard bearer and the painted chap is one of two dozen with what looks like some Hinchliffe command figures. 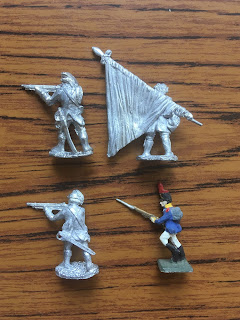 The rear view. The painted chap I have a feeling may well be a Tradition figures but I am really not sure.

I mentioned previously that I am now in the latter stages of sorting out Eric's unpainted late 17th and 18th century collection. What is left - and there is still three crates worth! - falls into the 'of unknown origin' category and so I am asking readers of the blog for help in identifying them.

I rather like the standard bearer but painting that flag would be the devil's own job! The muskets/carbines the two dragoons are using are very 'chunky' but they are useful figures all the same.

If anyone has any clues about the above - there will more mystery figures to follow for sure - please let me know.

Many thanks in advance.
Posted by David Crook at 08:42

Try as I might I have been unable to identify any markings on the underside - not even any company logo - I did wonder about Hinchliffe but the figure seems a little too tidy.

Further enquiries are needed methinks because the unit commanding officer is most definitely Hinchliffe.

The dragoons are RSM figures (later figures produced after the range moved to the USA). I think the French standard bearer might be from the original (since replaced) Front Rank Jacobite range..?

The painted figure makes me think of the small budget range that Cameron Robinson (of Freikorps, Platoon20, etc. fame) launched in the early 80s (Acorn?).

I did wonder about RSM for the dragoons but the weapons seemed a little too chunky compared to the infantry - thanks for confirming though. I can checkout the Front Rank situation but the painted fellow is proving tricky to pin down.