Historical Battles and the Portable Wargame 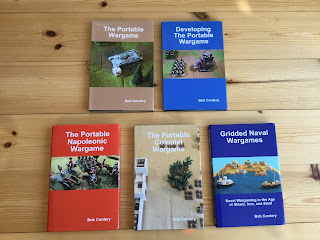 Missing a couple - Pike and Shot is currently in the man cave and my copy of the compendium is en route! I included Gridded Naval Wargames as this sits firmly in the ‘Portable Wargame’ school in my opinion!

First of all a belated Happy Father’s Day to all the Fathers out there! I am delighted to say that I was thoroughly spoilt by the children (aged 33 and 26 respectively) and the resulting retail therapy will feature just as soon as the large South American river disgorges its goodies for me!

My post about Waterloo to mark the anniversary has taken me somewhat rather by surprise in that it has really gotten the creative juices flowing again! I rather enjoyed the chessboard based lash up that I undertook a couple of years ago - it was great fun to do although as mentioned the figures (28mm) were too large for the squares (6cm) and the rules used were not the Portable Wargame - they were a straight conversion from Jay Ward’s excellent ‘Waterloo A La Carte’ game (which now adds a Quatre Bras version) - I always intended to revisit this with my block armies, the Portable Napoleonic Wargame and some rather more effective looking terrain but was then somewhat distracted - and continue to be so - by ACW ironclads and the like.

The comments section of the Waterloo post has prompted me to think about the whole chessboard Portable Wargame idea once again and so I thought I would share some of my thoughts about where this might be heading. 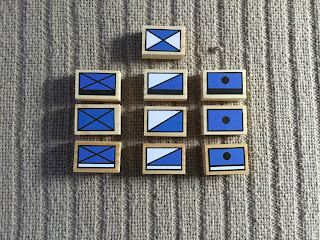 Old friends looking to make a triumphant return to the wargaming stage!

There is absolutely no doubt that the whole Portable Wargame phenomena is a hugely versatile system to game with. Whichever way you slice or dice it with house rules, scenario specific rules, tweaked changes, variants of every imaginable hue or whatever else takes one’s fancy the core system is nigh on unbreakable. Of all the game I have fought using the system myself I can count on one hand minus four fingers and a thumb the number of occasions where I have used them as written. Invariably I always add something or other by way of a degree of personalisation. To be honest I think most wargamers are inveterate tinkerers - either secretly or otherwise - and I am no exception to the rule! It is this inbuilt potential for versatility that I believe that makes it such a popular system.

Portable Wargame units can represent formations of every size from platoons upwards and, rather like the hugely successful Command and Colours series of boardgames, with little apparent loss of the overall flavour within the context of the scale of action being fought.

I have used the system for platoon level WW2 games and for corps level actions generally with a similar number of units on the table - typically from half a dozen upwards a side. The key thing is that a unit can be whatever it needs to be - and this is why I tend to be rather more comfortable using blocks rather than figures!

Try as I might I find it very difficult focussing on a single period of military history! I can get inspired by any number of things - a new book, a film or TV series or even a visit somewhere - all of which is a lot of fun but can be ruinously detrimental to any kind of ongoing project! The block armies have been a real boon in this sense in that I have been able to use them for a variety of periods up and down the timescale from the Seven Years War onwards (don’t worry, pre-gunpowder games will be featuring at some point!). To date I have mainly used them for ‘based upon’ style games and whilst these have been enormously enjoyable I am conscious that I have, in a sense, missed a trick.

Revisiting the Waterloo game reminded me of a Russo Turkish War game I fought some years ago using a hex based version of the ‘Big Battle’ Portable Wargame rules - Breaking the Camel’s Neck with Part 2    And Part 3 - which was something I researched and turned into a game and throughly enjoyed the experience doing so. When I fought the Waterloo game I was using the excellent order of battle and map designed by Jay Ward straight off the bat so to speak (apart from cramming his hex based map into a an 8 x 8 square grid) and whilst I really enjoyed the experience it was a little bit of a cheat on my part. When I tackle Waterloo again I will ‘map and orbat’ it myself. The Russo Turkish game was a very different beast altogether as I read about the campaign and battle, mapped the terrain onto a 13 by 9 Hexon table and then translated the order of battle into the units I would be using. I really enjoyed the whole process from start to finish and promised myself that I would do more of the same but instead drifted along churning out a seemingly inexhaustible stream of games that seemed to lack any kind of context despite usually being great fun.

In a nutshell I want to refight historical battles using an 8 x 8 game board, my block armies and the Portable Wargame system.

The Plan - and yes, there is one…sort of…

I have in my mind an idea of how I want to approach this. To begin with I will choose a particular campaign or battle and, for want of a better expression, ‘pick it apart’. This will mean translating the terrain into an 8 x 8 grid - obviously ensuring that key features are properly represented and contextualised  in the rules - and then looking long and hard at the order of battle. Both of these parts of the process are great fun and are worth spending some time and care over. When drawing up the game order of battle this is the opportunity to grade units according to their historical performance in respect of morale, strength and equipment etc. The same would apply to the grading of the relevant commanders. Finally, consideration should be given to the principal events of the day and where and when these happened.

I should perhaps point out that my idea of refighting a historical battle is NOT to slavishly follow each step as it happened - I prefer to have the starting set up and forces mirrored with due consideration for ‘what happened and when’ factored in - as that falls very much into Einstein’s ‘quote’ about the definition of insanity is doing the same thing over and over again and expecting a different outcome (he never actually said that but you get my drift!). The challenge will be for the player stepping into the shoes of whoever is being represented and attempting to change the outcome.

We are fortunate that military history has a very rich and varied palette for us to experiment with and so I will certainly not be short of raw material to choose from. In many ways this is the what the block armies were designed for - to be able to field opposing forces for use on a table top without requiring vast amounts of figures (although to be fair a typical Portable Wargame does not use many figures anyway - even less if you are using a 3 x 3 variant!).

So what does this all mean then?

Fighting historical battles is by no means the be all and end all of what I want to game. It will be a side hustle in many ways but one that I want to explore using the Portable Wargame. Figures and models will still feature in my gaming, as will battles and nations of my own design, so I am not pursuing some zen like state of solely using history as ‘the way’. It is just a bit of fun but on more rather more formal footing - meaning that I shall be putting rather more work into setting up a battle than just throwing blocks and terrain on the table with the vaguest of context.

In many ways Waterloo A La Carte reminded me of what I had been missing - taking a historical battle and turning it into a challenging game - as all the essential spadework had been done for me. By using the potential of the Portable Wargame system I hope to be able to tackle battles through the ages that are recognisable as such in a compact 8 x 8 format. Why bother? I hear you say. Well, for sure you could take the scenario books from any of the Command and Colours series and a big chunk of the work has already been done for you. The map, the forces and victory conditions, together with any special rules is all there and ready to use. For me the challenge will be doing it my way - not because of feeling in anyway superior but because for me setting this kind of stuff up is half the fun.

Just like Breaking the Camel’s Neck….(not literally, before you ask!)

I'm looking forward to seeing where you go next!

I am sure this will work for the majority of actions I am thinking of but naturally there will be some that would be too large or unwieldy to fit on a single 8 x 8 grid. Half the fun will be trying it out though!

As for where I go next well I have a list of ideas as long as your arm to play around with so once the ACW ships have been put to bed it will depend on what shiny thing catches my eye first!

Some great ideas in there David and I certainly am looking forward to seeing how you get on with this, especially with the wooden blocks. I must really dig my out and Bob's books too, to see if I can boost my current woeful gaming output at present!

I had a feeling that as soon as blocks were mentioned it may have piqued your curiosity! I have been so caught up with the ironclads that the entire block collection was feeling particularly unloved despite the addition of the (still) unpainted movement trays!

I figured that leaping back in with the blocks but at a level that I have not explored yet would make it a more rewarding experience which is better for me given time constraints etc.

Real life has a habit of getting in the way of hobby stuff - mostly for the better but occasionally not….

I hope that I can produce something to get your creative juices flowing again!