I have just returned from a two day family visit up into the wilds of Norfolk, deep in the heart of the Broads. There was absolutley nothing wargaming related to speak of; just good conversation, plenty of of food and drink and seasonal conviviality - which after the last few months of domestic traumas was a great tonic for all of us!

I was able to think and plan though, and so the next stage in the refight of the Battle of Deve Boyun, the Camel's Neck, is the subject of this post.

I have already decided that the rules I shall be using are Bob Cordery's Big Battle Portable Wargame 19th Century set and as a result of my deliberations of the last couple of days they will be used as they are written. I have a couple of scenario specific instructions needed for the action but these in no way change the rules. The only decidionI needed to make though was how to tackle the thorny question of exhaustion levels. For the Turks this is fairly straightforward but less so for the Russians. The reason for this is because the Russian attacks were made in three waves (four if you count the decisive finale) so I needed a mechanism whereby a specific action caused a reaction - essentially programming the battle but not in such a way that the result would be inevitable. What I have decided to do is to assign exhaustion levels to specific formations - this is how Volley and Bayonet by Frank Chadwick works - and to ensure that the opposition reacts accordingly when such an exhaustion level is reached. Luckily the action is very much an 'attacker-defender' battle so this is not too much of  problem.

The rather useful Osprey title on the war

For the most part the units of both sides are fairly anonymous in that we do not have much in the way unit designations but luckily we have plenty of commander's names to add some flavour. We are also fortunate in that we have the overall strengths for both sides which makes the calculation of the two sides a whole lot easier. I have used Quintin Barry's book - War in the East which is fast becoming one of the most valuable books in my collection.

Of the Russian forces the only unit identification I can find is that the Erivan Grenadier regiment was held in reserve and played a decisive role in the battle. These will of course be rated as Elite while the rest of the Russian Army will be Average. I have clased as such as they had been fighting the Turks for some time and had been chasing them for a while so would be seasoned despite the fact that the entire army was woefully understrength andwith many fresh reinforcements.

The Turks are mainly average although I have rated a third of the infantry as poor as the army was a hodge-podge of units, was suffering from indifferent to poor morale, was poorly supplied and was suffering from increasing levels of desertion - particularly among the cavalry.

The final composition of the armies then, was something like this:

9 x 4 Infantry (6 Average, 3 Poor) - 4 with Mehmet Pasha, 3 with Muktar Pasha and 2 with Ismail/Faizi - each formation has one Poor unit.
3 x Field Artillery - 1 battery with each commander.

This was fairly straightforward to calculate and the next post will include a formal order of battle with the appropriate exhaustion levels etc. The one point I should make with the infantry is that the Turks were equipped with the superb Peabody Martini - Henry Rifle which outranged the Russians by a fair margin and so I shall give the Russians a maximum infantry firearm range of 2 hexes against the Turkish 3. 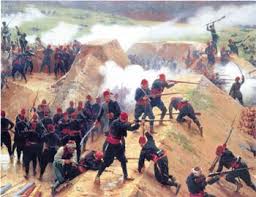 Turkish troops in action with the Peabody Martini-Henry rifle.

The battlefield consists primarily of a plateau - Ouzoun-Ahmet - at the head of a narrow valley through which the main road to Erzerum passes. Muktar Pasha was using the previously dug entrenchments on the plateau (on the left of the Turkish position), across the entrance to the valley and on the right flank. It was a strong position but Muktar really had too few men to defend it properly. The plateau will cover roughly two thirds of the Turkish frontage with the road running across the table in a roughly north west to south east direction. Facing the front of the plateau are a couple of small hills and the small village of Tehoban Dagh. The sole purpose of this is to provide an obstacle to the Russian advance as the Turks did not garrison it. In the front of the central position at the head of the valley and to the left is a small hill that the Turks garrisoned with some artillery and an infantry battalion. This position played a vital role in the battle - for each side as it turned out. On the Turkish right flank another small village was just in front of the position called Gulli - again this was not garrisoned by the Turks and was just an obstacle to the Russian advance.

The biggest problem is the ground leading into the defile. Quintin Barry describes the area as being unsuitable for large scale manoueveres with cavalry but does not elaborate on why. Given the rugged and mountainous nature of this part of the world one could speculate that the defile extended out in to the open ground in the front of the plateau and so any mounted formations would find such terrain heavy going.

The next post in this sequence will feature the battle itself and so all will be revealed in respect of the terrain and how it all hangs together (or falls apart!).

I am really excited about tackling this battle and also the theatre itself has given me many ideas for the future.