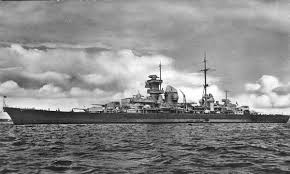 At the time of writing the two commanders will doubtlessly be poring over the campaign map and thinking great sweeping strategic or tactical masterstrokes - probably with a suitable beverage and a copy of Jane's/Conway's Fighting ships to hand.

While that is going on I have been beavering away on the campaign map movement system and the considerations of running a campaign. The biggest thing for me is in making sure that the respective commanders are of course only aware of that which they should be. This means that much of what goes on will be invisible to them in a 'game mechanic' kind of way. The commanders will only be able to influence that which they have direct control over - or how they react to changes in their situation - good or, more usually, bad. I have always believed that a good umpire is essentially a story director and as such the players feeding into the process should only have to worry about the decisions you would expect their historical/hysterical counterparts to have to make.

The system I am currently refining uses elements of the original 2008 Operation Seeadler campaign with a dash of General Quarters (1 and 2) and more latterly, a sprinkling of ideas from the old Avalon Hill boardgame Bismarck - which incidentally has a very nifty basic tactical combat system that I shall be, ahem, borrowing at some point in the future. At this stage most of the work is done and all that remains is to put the various assorted scribblings into some semblance of order.

This probably seems like a very slapdash approach - using a set of untested rules in a live environment - but the reality is that the respective commanders will only need to initiate their moves and then the action - gently guided by the hand of fate (or the hand of yours truly!) - will unfold.

I'm really looking forward to this!

High drama, tension, extreme swings of fate, exasperation, did I mention tension? - hopefully all will be there in spades!

I am really looking forward to writing up the entire campaign once it is over - complete with purple prose!

It's not all glamour - here I am toiling away in the South Yorkshire shipyard.....

Just out of interest David could you recommend a scale and UK model supplier for a complete naval novice? I have an 8' x 4' table to use but have no idea on what scale to play. Any advice would be very welcome.

Very pleased to hear it!

I will be happy to point you at several options for the aspiring naval wargamer - but it will be too much for a comment response. What I will do though is write a blog entry on the same which will appear in the next day or so which should give you (and the long suffering wallet!)much to think about!

I will say though that the great thing about naval wargames are that they, depending on what you want to do, can be very cheap to organise.