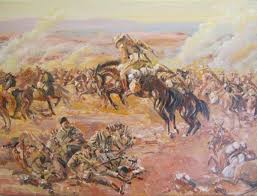 The charge of the Australian Light Horse at Beersheba

I mentioned Beersheba in my last post and as is usual with such a throwaway comment (at least it is for me!) it gave me an idea for a game, more specifically, a Portable Wargame. There is a fair amount of material on the net concerning this action and so I won't bore you with a rehash - read the following link for an overview of the events leading up to the action I am about to describe - Beersheba 1917. 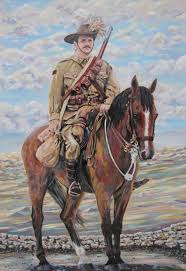 From the point of view of a game several things need to be borne in mind. To begin with, the area over which the Australians charged was the part of the Turkish defensive position that although entrenched did not feature any barbed wire or other obstacles. The Turkish defences were fairly well set out with interlocking fields of fire and with machine guns as well - including some sighted to fire across the flank of an attacking unit. The Turks had fought the Australian horsemen before but expected then to fight as mounted infantry - which they were - rather than cavalry. In previous engagements the Turks had tended to wait until the Australians were dismounting and would then open fire. Clearly a change of tactics by the Australians would then have the element of surprise. To have any chance of success the mounted infantry would need to charge home, cavalry style, as quickly as possible. As mounted infantry the Australians did not possess swords and so sharpened bayonets were used as a substitute.

At first glance in order for this work as a game the scenario would be expected to be full of special rules due to the unique nature of the undertaking. I originally considered doing this in order to reflect ineffective Turkish fire and Australian dash and élan but then had a change of heart and so the game will be fought using the Big Battle Portable Wargame rules for the 19th century as written - and with none of my usual tweaks in evidence. The game will require some thought in respect of the set up though but other than that should be fairly straightforward.

All the troops are classed as average - the Australians as they are being used in an unfamiliar way! 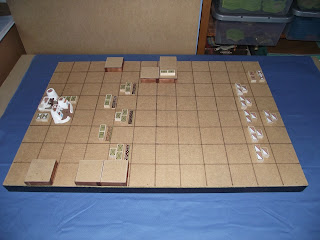 The initial dispositions - the Australians are on the right with their artillery deployed to engage the Turkish hill machine gun position. The Turkish infantry and machine guns are in the entrenchments with a sole infantry unit left behind as a garrison in Beersheba on the left. 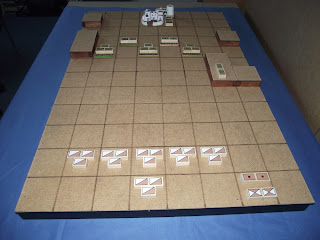 The view from behind the Australian position - shades of the Charge of he Light Brigade perhaps? 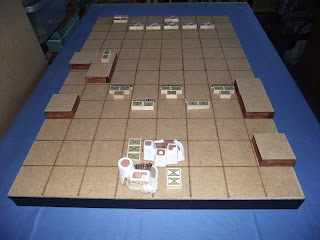 The Turkish defences on the outskirts of Beersheba - not as daunting as you might think, or are they? 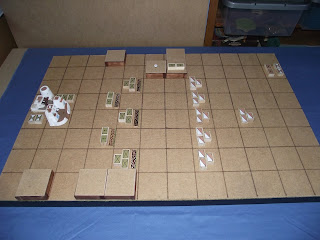 Turn 1. The Australian light horse advance with the supporting artillery engaging the Turks on the hill - and missing! 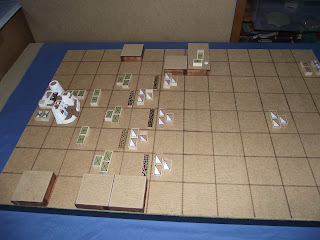 Turn 2. The Australian artillery plasters the Turkish hill machine gun with shells while the furiously charging light horse reach the trench lines. After a brief hand to hand struggle the Turkish defenders abandon them and fall back on Beersheba! 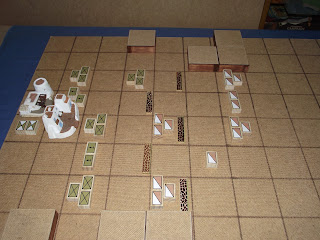 Turn 3. The artillery completes its work on the hill and the Turkish machine gun is no more. Meanwhile the light horse gamely pursue the Turks but not without losses and the occasional minor tactical withdrawal. The mounted attack is gradually losing cohesion. 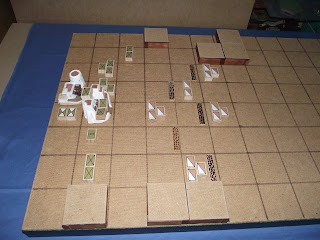 Turn 4. The Turks manage to take advantage of the temporarily faltering Australian advance and so they form a line with Beersheba as the anchor in the centre. 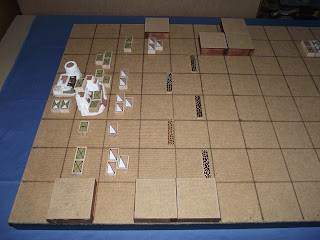 Turn 5. The Australian artillery moves up to support the by now reorganised  light horse whilst they push on to engage the Turks both in and around Beersheba. 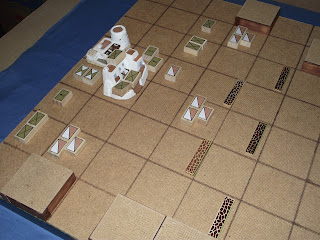 Turn 6. In a blizzard of close range rifle and machine gun fire and deadly hand to hand combat the Australian attack dashes itself against the outskirts of Beersheba itself and come to a exhausted halt! Meanwhile the Turkish defenders, run ragged by the marauding horsemen, have also seen enough for the day and so both sides with one accord, break off the action. 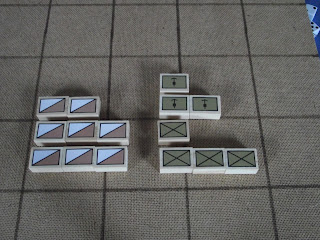 The final reckoning - Australia 8 and Turkey 7

So what did we learn from this action then? Well, a cavalry attack needs to a) keep moving and b) make full use of the initiative. It was interesting that the Australians did far better on the turns in which they had the initiative simply because when the Turks had it they usually just fell back and shot at the pursuing light horse. The light horse would charge in and have a better chance in the ensuing melee rather than relying on rifle fire.

The artillery did exactly what it was supposed to do but sadly could not keep up with the attack which would have been very helpful to the light horse had such support been available.

I envisaged this action going one of two ways - either the Australians would blitzkrieg the Turkish position in fairly short order or else those cantankerous horsemen would be shot to pieces by machine gun and rifle fire.

I certainly did not expect the result that I actually got!
Posted by David Crook at 16:31

What a great little action! The board looks very good. Is the surface just raw Masonite? I would never have thought to do that.
-Steve

It is not Masonite but hardboard or high density fibreboard. It is very smooth on one side and very coarse on the other. I have used the coarse side as it has a nice texture to it and looks pretty good for a quick and generic desert type board. I will eventually make something a little more artistic but it suffices for the moment and cost next to nothing to make - just the cost of the marker pens for the grid!

The action was great fun to play and actually very tense up until the last turn. I thought the Australians had done enough for the victory until the Turks showed their mettle in the final turn.

It was actually quite a challenging little action and I thoroughly enjoyed it - I only hope that any Australian readers do not take me to task for changing one of their finest historical actions!

An engagement close to me heart indeed Sir!

It was an impressive feat of arms and no mistake and The Lighthorseman is one of my favourite films!

Cavalry: the weapon of the future! And to think that back in Blighty there are chaps messing around with these new 'tank' things. They'll never catch on.

It was very tense right up until the end and I am not sure what difference any of those tanks things would have made! An interesting idea to try though!

A very nice action and yet another great battle report.

I only wish that I could keep up with you!

Many thanks old chap! The action was fairly small in terms of numbers but very interesting to fight. I am thinking that for a 12 x 8 PW board that between 24 and 48 strength points a side is about as large as you would want to fight.

I have had a slight advantage over you in that I have been at home and not on the high seas - I am quite sure you will catch me up in due course and suspect that you are itching to get a game or two under your belt!

What a cracking game! The whole setup has such clean lines that it looks most effective.

Welcome aboard and many thanks! Using the blocks does make for a clean looking game and I have had a lot of fun using them.

Are you the Barry Carter of 'Naval Wargames' fame?

'Fraid not, but in the "olden" days I produced the "Barrack Room Buildings" that Peter Laing used to sell.

Peter Laing eh? That is a blast fom the past and no mistake!

I am glad you enjoyed the game and look forward to running many more.