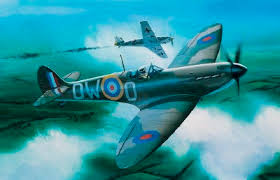 During the Battle of Britain the Luftwaffe often sent across the channel small raiding flights consisting of a single or pair of fighters at low level to shoot up any targets of opportunity in the hope that such nuisance raids would force the RAF to maintain standing patrols or similar with the obvious wearing down of efficiency as a result. Usually the raiders could be in and out very quickly due to preferring to engage targets on or near the coast. By the time the RAF could muster any meaningful response the raiders were usually halfway back across the channel.

The following scenario depicts such an action but with the RAF being able to attempt an interception. The two German Bf 109Es and more or less on the deck (level 1 in game turns) and the patrolling Spitfires are above them. The RAF fighters are aware of the approaching raiders (the Observer Corps had fortuitously correctly identified the two planes as hostile and by sheer luck a pair of Spitfies were in the area) but had yet to spot them. The two Germans were mostly concerned with strafing a suitable target and then heading back to France.

The scene was thus set for a classic duel between two of the most iconic fighters of the war years.

Somewhere over the Kentish countryside, Summer 1940.... 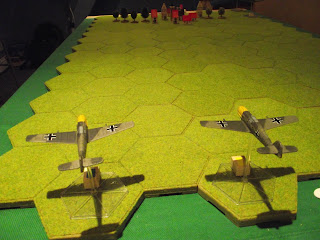 The initial dispositions and a raider's eye view of the fast approaching target. Just visible in the top right of the picture are a pair of RAF Spitfires. 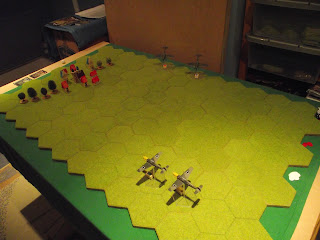 Turn 1. The unsuspecting raiders continue on their way as the two Spitfires, having successfully spotted the Germans turn into the attack with a long swooping dive. 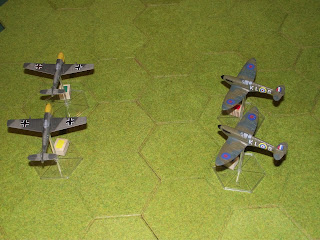 Turn 2.'Achtung, Spitfeuer!' The two RAF fighters spring the trap but the Germans have spotted them on the way into a good firing position 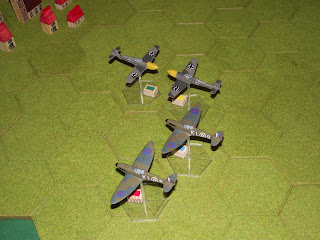 Turn 3. With frantic weaving the Germans attempt to out turn the Spitfires - a move completed easily by the Luftwaffe wingman but failed by his illustrious flight leader. In the head on exchange of gunfire the quality of the German Ace shows through as the Spitfire is raked with machine gun bullets and cannon fire - first blood to the Luftwaffe! 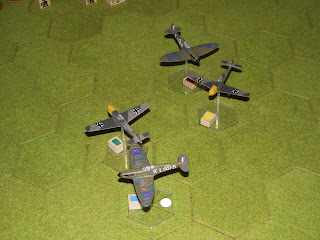 Turn 4. With a Spitfire hard on his tail the German Ace continues to attack the frantically dodging enemy aircraft, inflicting sufficient damage to cripple the RAF fighter. The Ace's wingman, seeing his leader in trouble turns as hard as he able to in order to assist. 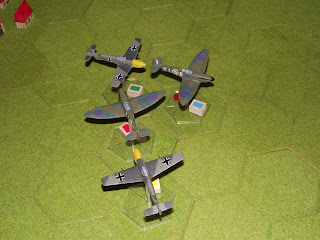 Turn 5. With the Merlin engine coughing and spluttering whilst belching great plumes of smoke and gouts of flame the battered Spitfire limps away from the action with the enemy wingman lining up on his tail at poiunt blank range! Unfortunately, in his zeal to finish the Spitfire the German has neglected to watch his own tail as the remaining Spitfire lines up on him. The German Ace meanwhile, does exactly the same and so a line ahead of all four aircraft is formed with the crippled RAF fighter in the lead! Turn 6. The RAF fire first and the novice Spitfire pilot destroys his enemy plane (note the dice roll!) and saves the crippled fight leader! His success was short-lived though as the German Ace calmly blew his opponent into so much metallic confetti (again, note the dice roll!)! 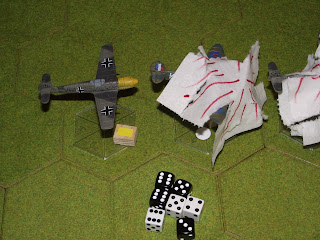 The crippled Spitfire swung away from his would-be tormentor and gratefully headed for home whilst the German Ace, with one eye on his fuel gauge, did likewise. The target had been saved!

Once again I fought the action without using any special abilities and it seemed to work really well. The Spitfires were unlucky with their shooting and the Germans could have been in serious trouble but in the end the quality of the pilots counted. The Poor RAF pilot was flying with a -1 to any shooting dice rolled and so a couple of his shots that would have ordinarily caused damage failed to register. Mind you, he made up for it with a very impressive point blank barrage to down the German in one!

I need to get the pilot quality bonuses finalised but I reckon that his will work really nicely without using any of the game abilities but this may be a step too far for some!

I also need to get the models painted - badly! (by that I mean painted asap not painted badly - you know what I mean!).

A rather "bloody" RAF marginal victory?

I was very pleased with the way the game worked using my tweaks and I am hoping to explore this idea further. But for some different dice rolls it could have had a very different outcome!