Evzones in campaign dress during the Balkan War

This blog post came about as a result of the generosity of Mr Fox. Every so often he has a clear out from his collection of wargames magazines as he now has most of them on disc. His usual MO is to cut out those articles of interest and pass them on to whosoever has an interest in that particular period. I have received numerous bits and pieces from him over the years in this fashion and very handy much of it has proven to be.  The scenario I am running in the following post is based on such an article concerning the Battle of Sarantoporou fought between the Greeks and the Turks at the the start of the Balkan War in 1912.

Historically the Greek Army of Thessaly, consisting of six infantry divisions, a cavalry brigade and four independent Evzone battalions, under the command of the Crown Prince Constantine crossed the frontier and manged to push back the Turkish covering forces to the previously prepared fortified positions in the Sarantaporon Passes. The terrain favoured the Turks and the passes were easily defended by the smaller force they had available of some 25 battalions (11 of which were reserve formations), 24 guns and three machine gun companies under the command of Tahsin Pasha. Many of the Turkish formations were under strength and so holding the positions was the only viable option for the Turkish command.  The positions had been constructed under German supervision before the war and the Turkish plan was for the frontier force to fall back to it.

The Greek army duly pushed the Turks back to the fortifications and engaged the main force with the 1st, 2nd and 3rd Divisions. Meanwhile, the 4th and 5th Divisions probed to the west with a view to outflanking the Turkish defensive line. While the centre was occupied (and sustaining heavy casualties from the Turkish artillery) the flanking attack succeeded in driving the Turks away and so, faced with potential encirclement, the remaining Ottoman troops abandoned the key Sarantaporon pass, leaving virtually all their artillery behind. German Field Marshal Von Der Goltz had confidently proclaimed that the passes would be the 'Graveyard of the Greek Army'. Events proved to be otherwise.

The game was fought using Bob Cordery's memoir of Battle rules with some minor changes. I made use of the exhaustion level idea and also allowed machine gun units to deploy in a hex with another unit, together with making the Turkish infantry strength 3 instead of the usual 4 - and that was the extent of the changes. 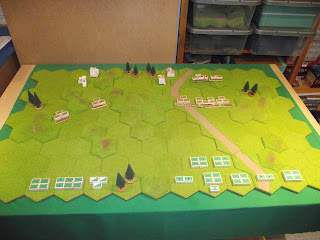 The initial set up - the Greeks are at the bottom of the picture. Note the central Turkish position and the Greek flanking force on the left. 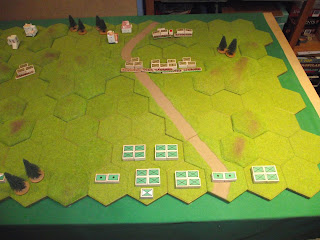 The main Greek force preparing to force the main pass. 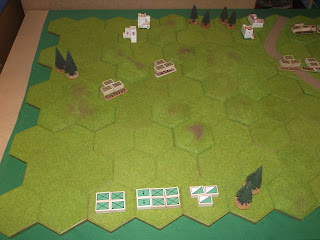 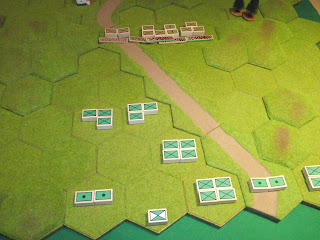 Turn 1. The Greek 1st and 2nd Division advance to engage the Ottoman position and come under Turkish rifle and artillery fire. Each side suffers casualties, with the Greek attack coming off worse. 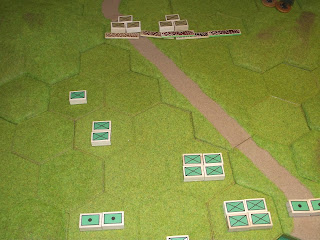 Turn 2. Both sides artillery get into their stride with the Turkish machine guns being knocked out by a combination of field guns and rifle fire with the two Greek infantry units sustaining further casualties. 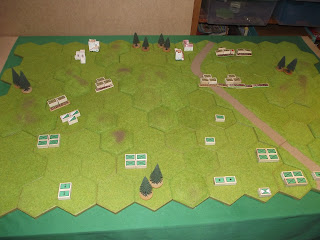 Turn 3. While the attack in the centre falters, over on the left the Greek infantry advance and the cavalry charge into the entrenched Turks. 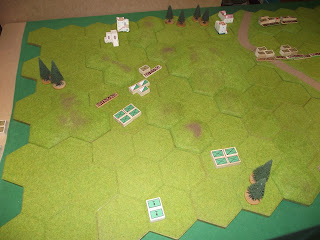 Turn 4. The Greek attack on the left destroys first one Turkish infantry unit and severely damages the remaining one. Although the attack in the centre has faltered the Turkish flank has been driven in and so the main position can be outflanked at leisure. The Turks have been defeated and so the stain on Greece's honour dating back to 1897 has been removed! 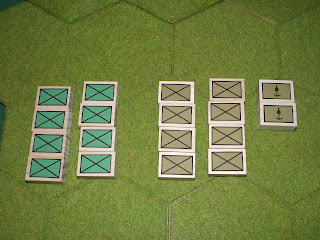 That was very quick indeed but in four turns more or less followed the historical action almost to the letter. The Greek attack in the centre was plastered with rifle fire and artillery and duly faltered. The left flank attack  made cunning use of the initiative (in fact the Greeks won the initiative on every turn) in order to carry the position - added by some poor Turkish dice rolls - and this proved to be the key to the Turkish defensive line.

I really enjoyed revisiting Memoir of Battle and the rules worked very well for this action. The one thing that has come out of this though is that I need to get some mountainous looking terrain - I believe that Hexon make some rocky outcrops - as this part of the world is quite craggy.

All in all then, a very pleasant way to pass an hour or so.

Definitely a good use of an hour.

Great info on the battle! I was rooting for the Greeks!

I certainly thoughts so - it made a pleasant diversion from all the Xmas stuff anyway!

It made a nice change to use them rather than the more usual Bulgarians. There are a couple of tweaks I want to add into the rules but they certainly give a fast game and with the all important 'feel' factor.

It mirrored the history rather nicely I thought.