What have the following items got in common? 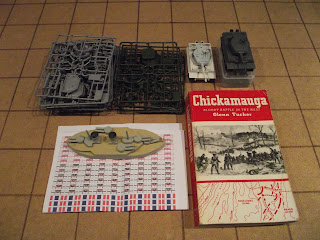 Two sets of Zvezda 20mm plastic German and Russian infantry of WW2, a pair of (roughly 1/72nd scale plastic Tiger tanks (motorised!), a sheet of assorted naval ensigns, a scratchbuilt wooden model of the WW1 Moltke class battlecuiser and a book about the campaign and battle of Chickamauga during the American Civil War

Well, the first two items mentioned - the 20mm infantry and the two rather natty looking Tiger tanks dropped through the letterbox a couple of days ago courtesy of that very generous Mr Tim Gow of Megablitz and More fame. The figures have both solved one dilemma and caused another - the solved one is that I now have a selection of models with which to start my long planned Eastern Front set up in 20mm and the unsolved one is which year I should tackle! I am looking at 1942 as opposed to 1943 now as the figures are more suitable for the former rather than the latter - it also means no 'tank power games' so beloved of the late end of the war. The two Tigers will get a repaint and I am looking forward to getting back into the painting groove with them.

Many thanks to Tim for these - much appreciated old chap!

The remaining items came from rather further afield - in fact from the US of A! Steve Page, of Old Admirals fame very kindly donated these three items (with a little help from Spike Page who produced the flags!) all of which are very much appreciated for different reasons. The flag sheet will be very useful for any of the models I plan to scratch build for the period (and yes I have some in mind!) and the model itself has given me  much in the way of ideas for just how to tackle similar projects myself. The ship is 'cartoon style' in that the layout is faithful to the original design but the dimensions have been changed for the ease of modelling. I have admired Steve's work as seen on his blog and actually having one of his models on hand is really helpful when considering building techniques etc. The book was an unexpected treat and Steve actually lives fairly close by the battlefield itself! I fought Chickamauga as a solo game based on Battle Cry but am unfamiliar with any of the background to the battle so this will fill that particular gap quite nicely. As a result I hope to get some additional ideas for some Portable Wargames in the new year.

So to Steve and Spike, many, many thanks for the goodies - again, they are very much appreciated.

Yup! Xmas appears to have come sooner than expected!