Panther G - arguably the best tank of the war but not without its problems. The side armour was relatively thin though and was able to be penetrated at long range by the both US 75mm and the Russian 76mm. It was very tough at the business end though....

The following game is a refight of an action played out by Jim Duncan using his 10mm collection on his Heroscape terrain and using Bob Cordery's Big Battle Portable Wargame Modern rules. See - Jim Duncan for the fall story of 'round 1' of the action I am now calling 'Breaking the Panzers'. My version will be fought using the same rules but with a few tweaks and also using my Hexon terrain, with, of course, the blocks.

The scenario will follow exactly the set up that Jim used for his game - orbats, starting positions and exhaustion levels etc. As mentioned I shall be using my own tweaks in that I have changed the sequence of play and have replaced Bob's activations system with something rather more basic. The changes are summarised as follows:

The forces are made up as follows:

Hauptmann Schumacher was tired, hungry and despondent. His men had been fighting constantly for weeks and were short of ammunition, fuel, food, medical supplies and transport. They had been machine-gunned and rocketed across half of France so it seemed by the cursed allied 'Jabos' and so when the weather took a turn for the worse it was a blessed relief. Any day with rain or fog meant a stay of execution for him and his men and so was welcome.

He surveyed the terrain in front of him and knew that they had to breakthrough the Tommy lines as soon as possible. The Germans were disintegrating across all of France and so the frontline was fluid and changing constantly. All he knew was that he had to get him and his men to the East - which meant fighting through whatever was in front of him, in this case, the British.

His plan was simple and well within the capabilities of his battered command. He would seize the two small woods and the town in front of him to keep the road clear for his fuel starved tanks. Once this was done they could punch through the British lines in a 'blitz' move; the tanks leading and the infantry following up. He allowed himself a wry smile as he considered that his plan, whilst sound, was one of desperation and although would probably have worked in 1940 or 1941 was risky in the extreme by 1944.

With a silent prayer to a god that had probably forsaken him, he gave the orders to move out.... 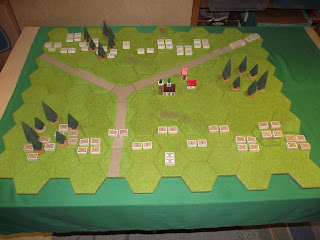 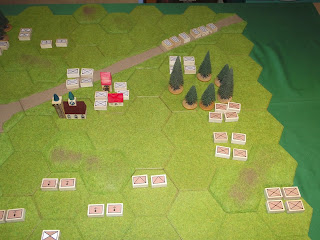 Turn 1. In order to keep the road clear and provide some cover for the cautiously advancing Panzers; the German infantry move into the small village in some numbers and also into the wood. Meanwhile, the British infantry also head for the trees in order to challenge the German advance. 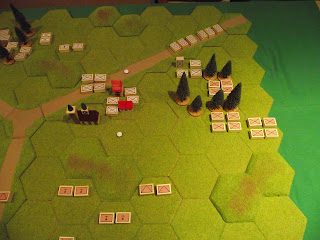 Turn 2. The German armour halts whilst the infantry consolidate in the town. Meanwhile a furious close range battle develops in the woods with the Germans coming off worst. Ominously for the Germans in the town the British Mortars begin to zero in on their position. 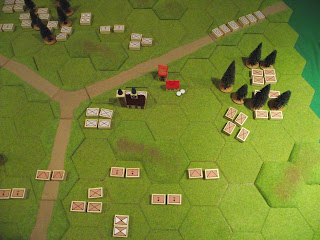 Turn 3. The Germans are chased from the woods and fallback deeper into the town under a combination of accurate mortar fire and long range rifles. Their countrymen move out cautiously from around the church. The British are content to consolidate in the woods - not daring to approach the waiting German armour. 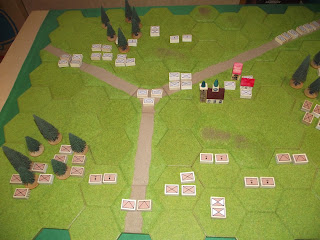 Turn 4. The Germans switch their efforts to the other flank as first the armour, then the infantry move out. The lull in the British Mortar fire (they changed targets to plaster the hill in the German centre) enables the Germans to reoccupy the part of the town nearest the woods. The British redeploy their left flank to include a machine gun in order to meet the coming threat as well as reinforcing their centre with an infantry unit. 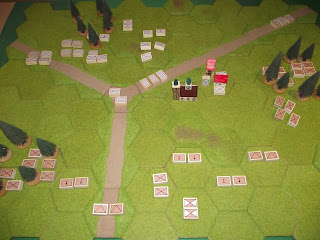 Turn 5. The Germans reinforce the leading armour unit taking fire from the British anti tank gun whilst the town again comes under telling long range rifle fire. Meanwhile the British infantry in the centre comes under attack from the German tanks. 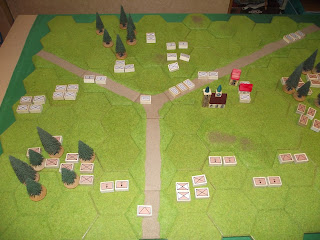 Turn 6. The German infantry assault, supported by the machine gun and the armour at the crossroads, begins. The British are happy to await events but the commander moves to bolster his anti tank gun. 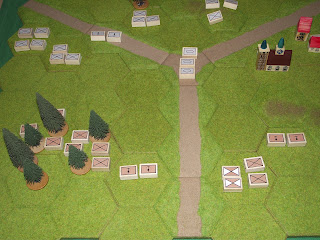 Turn 7. In an effort to force the pace the leading German armour unit charges headlong down the road to tackle the remnants of the anti tank battery. The ensuing melee sees the armour finally knocked out, together with the last anti tank gun! Meanwhile the German infantry assault slows to a long range firefight with casualties on both sides. 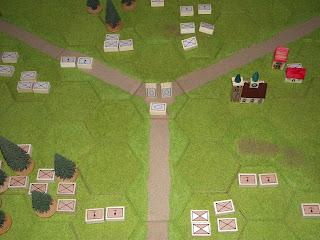 Turn 8. The British mortars, desperate to support their infantry, zero in on the crossroads and plaster it with 3" bombs. The barrage proves too much for the tanks as two of the three burst into flames and are hurriedly abandoned by their crews! The British have held and the German attempt to breakthrough them has failed. 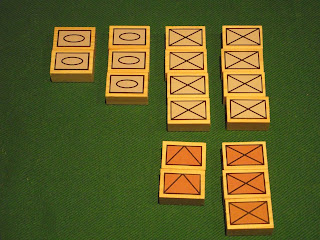 The final score - Germans 13, British 5. A fairly comfortable victory for the Tommies as the much vaunted Panzers came to grief from a combination of anti tank and high explosive shells.

Well, well, well! The scenario played out very nicely indeed and so is certainly one I would try again. The only difficulty I found was that the mortars seemed to be very effective although the dice they consistently rolled was obscenely good - in fact in game turn 8 they rolled a pair of 6s to hit followed by a pair of 1s for effect! Mortars against tanks will be an issue that will run and run methinks although the Germans were stationary at the time. All the firefights went well and felt 'right' - lots of dice rolling with the odd casualty - and the few close combats worked out OK. The tank charge against the anti tank gun resulting in mutual destruction looked odd (I always think that mutual destruction does look strange) but could easily be justified  with a little imagination or the liberal application of some purple prose....;-)

My thanks to Jim Duncan for the idea for this game but not for making me think long and hard about using 10mm for forces on Heroscape tiles!

Well done DC, another facet revealed of this little gem of a scenario (normally I'm quite modest).

I'm sort of happy that your game finished in a similar fashion to mine, it lasted two moves longer perhaps due to the more patient build-up by your German Commander. It sort of makes my outcome seem less of a freak result.

You didn't mention the armour testing to run out of fuel at any point, did you make any changes here?

Anyway, a superb game. I wonder what the others will think of it!

It was great fun to fight and I forgot to mention about the fuel roll - the Germans made it every time! I was concerned about the 'mortar barrage of death' but that was simply because not only was the dice rolling of a very high quality but also the commander was overseeing the firing!

The German mortar did not even get to fire a shot the entire battle.

I had great fun with this and am looking forward to whatever you dream up next. I only hope though that it does not look as good as my resolved about 10mm is weakening by the day as a result of your efforts!

All the best and many thanks 0nce again,

Yes, the Commander bonus is something else I'm going to have a think about. I need to weigh up the pro's and con's around it and come up with a different solution as Bobs current offering is a little bit out of balance.

I think that the bonus is best left as is for the 19th century version but perhaps for the modern era it could be restricted to perhaps a single unit or even at a cost for the bonus - say an activation point per +1 used.

When I run the scenario again I may be tempted to drop a mortar and replace it with a machine gun for the British and give the Germans an extra Machine gun.

Still thinking about 10mm - curse you! - and not just for WW2 either!

How long did it take to play?

Many thanks old chap! Jim's idea was a good one to play around with. The game lasted around 45 minutes which for me is absolutely ideal.

The prose was quite subdued as I am saving myself for the year's grand finale!