Hurricanes over the Arakan....Game Number 29 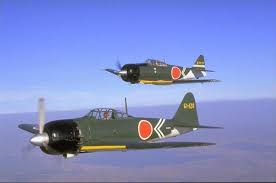 A pair of Zeroes looking for trouble....

1942 saw the Japanese chasing the British and Indian army up the full length of Burma - described as the longest retreat of the British Army - and the RAF was heavily involved although both outclassed and outnumbered by the marauding Japanese air force. Number 67 squadron, flying Hurricanes, was fought to a standstill and in fact, was only fully operational for a single month such was the pace of operations.

The following action was fought using Axis and Allies: Angels 20 with my recent amendments to pilot quality and, by way of an experiment, without any of the special abilities described on the aircraft data cards. I also used some experimental rules for spotting as I am of the opinion that many fighter versus fighter engagements came about as the result of one side 'getting the drop' on the opposition - many of the top scoring aces of the war would, in effect, sneak up unseen on the enemy and administer the coup de grace on an unsuspecting target. Spotting then, is of paramount importance for any pilot that wants to live long enough to recount their adventures to their grandchildren (presumably looking up at them with either rapt attention or else mightily bored!).

The following are the base scores needed to spot an enemy aircraft:


Ace or Veteran pilots add plus 1 to the roll of a D6, Poor pilots deduct 1. A deduction of 1 is made if the plane being spotted is at a higher level, also if the enemy plane is viewed against the sun.

The scenario pits a flight of four Hurricanes being 'bounced' by a pair of Zeroes somewhere over the Burmese jungle. The RAF fighters are all at level 3 whilst the Zeroes have both the height and positional advantage. Can they make this count? 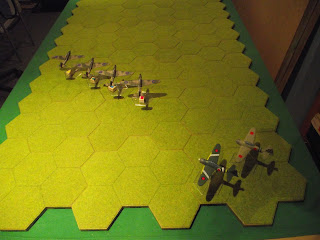 The initial positions. Note the Hurricanes operating in a quarter line - the Ace is second from the right. The green playing surface is representative of the Burmese jungle  and not because I couldn't be bothered to get the blue Hexon out (that is my story and I am sticking to it!) 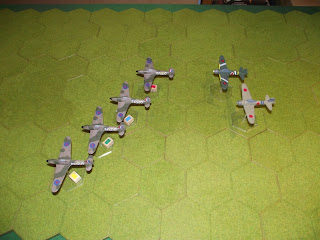 Turn 1. The RAF fly serenely onwards, unaware of the approaching Japanese fighters. Although they were attempting to spot all around them the boys in blue did not see anything amiss.... 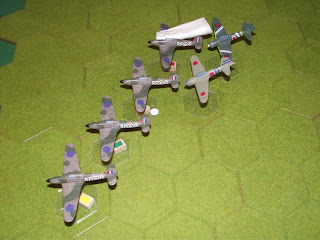 Turn 2. No doubt with cries of  'Tora, tora, tora!' the pair of Zeroes ease their sticks forward and dive down on the unsuspecting fighters. With machine guns chattering and cannons booming the end Hurricane disappears in a ball of fire and the gunshot holes appear all over the Ace pilot's aircraft - the bounce had worked! 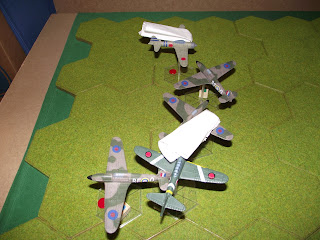 Turn 3. I neglected to photograph turn 2 but the Zeroes continued to press their attack, crippling the RAF Ace's plane. For turn three the Ace limps away from the fight whilst two of the Hurricanes are able to turn on the Japanese wingman. Sixteen Browning machine guns open fire and so the Japanese wingman disintegrates. Meanwhile the other Zero exacts a measure of revenge and destroys the second Hurricane. 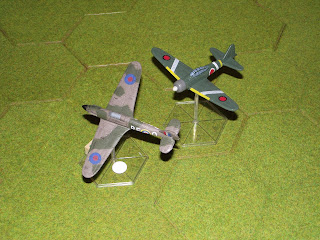 Turn 4. Whilst the RAF Ace limps away to safety the remaining Hurricane has his hands full with a Zero all over his tail. The Zero fires and damages the frantically weaving enemy fighter. 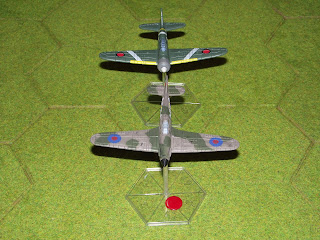 Turn 6. The Zero manages to get into an optimum firing position but fails to land a killing shot. The Hurricane though, is badly damaged and unlikely to survive the attention from his tenacious tormentor!

With both remaining Hurricanes belching smoke and flame and exhibiting all the handling characteristics of a house brick, the action ended. Two Hurricanes destroyed, two probably write-offs against a Zero downed.

It was short, sharp and desperate and great fun to play. The spotting and pilot quality rules seemed to work well - even not using any special abilities did not appear to cause too many difficulties. The Hurricanes reacted correctly to the attack and all the aircraft attempted to turn into the enemy. The Japanese made a mistake though in that they were, in effect, on the inside of the Hurricane turn which meant that the outside fighter (the grey Zero) found itself with a pair of rapidly closing enemy fighters with firing positions. The Zero is a supremely agile fighter but cannot afford to take any damage. As the two Hurricanes were up close and personal the likelihood of the Zero emerging unscathed was remote - and this proved to be the case.

Apologies for the missing photo though - I shall put it down to the intensity of the action!

What on earth are are Navy Type Os doing over Burma in early 1942 ?

Or has your research unearthed new historical evidence hitherto unaialable ?

The simple reason is that only Zeroes are available at present in the Angels 20 range. I am thinking that Oscars would probably be more representative but I shall have to wait until February for those!

Good Show - no doubt the chaps are working on a plan to get some payback on Tojo!

Indeed! Once the Pacific set is out some more action will follow - and I will make sure the fun is reported on the blog. In the meantime though I shall make some plans for what I want to add to the collection.

Is this the reason for a "tail end Charlie" in a formation?

Surely the Wing Commander knows that the Zero was the ONLY Japanese fighter of the war, and was even in secret service in 1938, as evidenced by its sightings and encounters in and around Bora Gora :)

I think you have hit upon a key point in fighter actions with your spotting rule. This applies to fighters of almost any period. "They never knew what hit them" is the pilots obituary all too often.

I look forward to more air games from you!
-Steve

I am sure the good wing commander was merely being facetious! I suspect that naval Zeros may have been used along the coastal area but am not familiar enough with the campaign to sat definitively.

It certainly makes you keep your eyes open and as you rightly point out - 'They never knew what hit them' was absolutely true in many cases.

They need a little refining but other than that are good to use as they are and I am very glad to have added it in.

If you mean anything other than to provide target practice I would be interested to know!

It was good fun and I am only sorry I missed turn 2. The models are next on the paint tray for some attention and I am looking forward to the process.