Thoughts on an Electronic Campaign 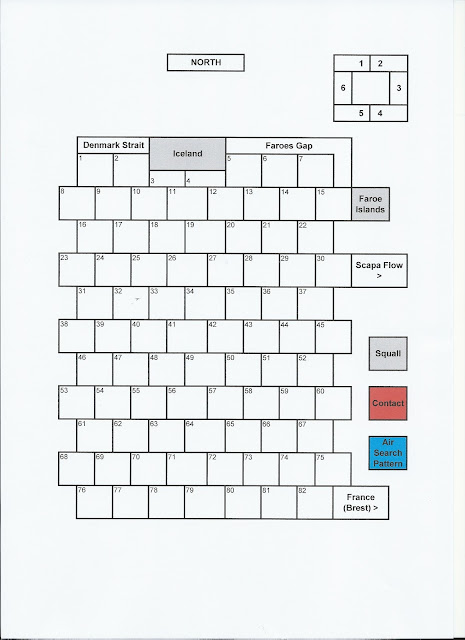 The theatre of operations rendered in a suitably abstract style - any similarity to the tactical map used in Axis and Allies: War at Sea is purely coincidental! Note that much of what will feature on the individual players maps is missing - including anything associated with the weather.

Operation Seeadler is a first for me in that I shall effectively be running it via email. That in itself is not so problematic and I know of other gamers that have carried out games and campaigns at great distances and very successfully using such a method or even via Skype, complete with images etc. For me the important thing will be ensuring that the situation unfolds clearly (obviously far less so for the two protagonists!) so that I can not only be confident that the information I pass on to the affected party is accurate but that also - and this is doubly important - when I come to write the after action report I can see what happened and when.

How do I do this?

Well the first priority is making sure that the players are clear on what they are supposed to be doing (the 'how they do it' is their responsibility!) so the individual briefings that set the scene need to clear. I am lucky in that the original version drafted way back in 2008 are still fit for purpose with only very minor revisions required.

The next requirement is having a set of campaign rules that are easy to understand as players should be fighting the action and not the rules. Again, most of what I used way back in 2008 is still perfectly acceptable with but a few revisions needed.

Hand in hand with the campaign rules is of course the method by which the orders from the respective commanders are translated into map moves to be coordinated by the umpire, aka yours truly. I will of course  set down guidelines as to how orders are drafted - hopefully these can have just a sufficient degree of potential ambiguity to make for some interesting umpirical interpretations!

The plot map has been drafted (again, this is the 2008 version slightly updated) and I plan to save a copy of this on a move by move basis in order to be able to follow the course of events as they unfold. The map is a very stylised view of the North Atlantic with a grid of offset squares to regulate movement. The original was set up using Excel (with which I am fairly comfortable using) and works for this kind of recording very nicely. In fact, the use of offset squares featured in the old Avalon Hill boardgame Bismarck and also as the tactical battle map for Axis and Allies: War at Sea. My plan is for the two commanders to send me their orders, I will then update the master map and return them a copy of the map with their latest positions plotted. This will also contain details of any contacts.

That takes care of the strategic side of things but what about when the shooting starts? Well, as mentioned previously, the tactical games will be run by Tim Gow and will be using his 1/1200th scale models and Fletcher Pratt rules. I will need to tie up with him how the strategic and tactical turns dovetail but that should not be to problematic.

I mentioned some time ago (around about SELWG if I remember correctly) that I had acquired a large chunk of 1/4800th C in C ship models for both the RN and the KM and so I fully intend running this campaign as a solo exercise once the models are ready (bear in mind that I will not be taking delivery of these little beauties until December 25th!) but with a different set of rules. Using 1/4800th scale ship models with Fletcher Pratt rules would be a challenge but is not one I should care to undertake!

Given the time of year and the pressing commitments we all seem to have I expect that this will not really get properly underway until the new year but it will certainly give all the participants something to think about in the meantime.
Posted by David Crook at 15:18