Wargaming Campaigns and a Logical Extension 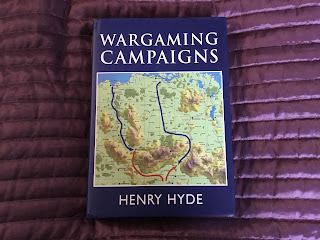 This is truly a magnificent volume and with his earlier title - The Wargaming Compendium - form a duo that will the cornerstone of many a war games library I am sure.

Taking part or running a war games campaign can be an immensely rewarding experience. Revisiting such  an undertaking with those that took part serves to cement a shared experience in the best possible way - reminiscing over battles large and small as well as the more colourful incidents that inevitably occur in my opinion transcends the actuality of the campaign. In truth it assumes a life and identity of its own, to be spoken of in terms of endearment and enjoyment, usually in spite of any problems along the way.

It is true to say that there are no limits on how large or small a war games campaign should be and indeed, one of the attractions is tailoring the project to suit one’s own ideas and available collection(s). It can be quite an undertaking to organise and maintain and so proper planning of the undertaking is essential.

Henry Hyde has written what I believe will become the standard ‘go to’ work for organising and running a war games campaign regardless of size, period or genre. So far I have merely scraped the surface of this truly epic work but one thought above all has struck me. This work should be viewed as the logical successor to the classic works of Featherstone, Grant and Bath but for the current digital and internet age. In short, it brings the concept of the war games campaign bang up to date and to use a Simon Cowell X Factor phrase, makes it ‘relevant’ for todays gaming audience.

The picture below will do the talking in respect of the contents of this work. 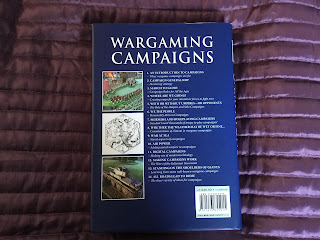 I am thinking that the contents list ticks most of the boxes!

The book is a goldmine of ideas and practical suggestions for pretty much every facet of organising and running a war games campaign, regardless of period, scale or genre. When I say scale I mean the size of the campaign rather than that of the figures or models being used. From stringing some scenarios together right up to the full on creation of an imagi-nation, complete with terrain, government, economic and social background this book has it all and much more besides. It really is a treasure trove of material.

Flicking through the pages I could not help musing over how those stalwarts of yesterday - Featherstone, Grant, Bath and inevitably Eric Knowles - would have viewed this work. I like to think they would have been hugely impressed.

I mentioned about taking part in war games campaigns and how the memory and shared experiences can provide a rich seam of enjoyment over the years for those that took part. In this particular case the shared experience was of course the legendary Madasahatta campaign organised by the late Eric Knowles and in which many of my life long war gaming friends took a part in.

Looking back over the forty plus years since the campaign was fought I have been truly blessed in the friends that I made from that shared experience and that still form my own, dare I say it, ‘band of brothers’ so to speak.

My copy of the book was a present from Bob Cordery in memory of both Eric Knowles and of the Madasahatta campaign ‘In Which We Served’ that proved to be such a defining moment in our respective war gaming journeys. I have few words to say (blimey, that must be a first!) other than extending my sincerest and grateful thanks to Bob - not only for his incredibly generous gift but more importantly for his continued and unstinting friendship, advice, encouragement and support extended

to me over the course of my various gaming projects.

It is also once again a mental thank you to Eric for Madasahatta and the many other spectacular war games he organised and allowed this skinny young man (I was then….) to take part in. Not to mention planting the seed for my lifelong interest in the Ottoman Turks! 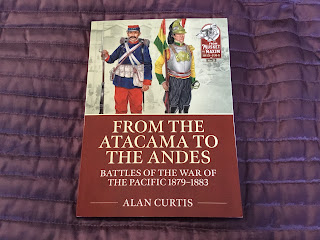 Yes it does include the naval dimension and no, I do not have any plans to buy figures for it BUT, I could give the block armies a spin with ‘It’s Getting a Bit Chile’ by the redoubtable Trebian….

The final part of my Father’s Day Amazon gift card arrived along with Wargaming Campaigns - a great start to a Monday morning I can tell you! - and you can see above it is the new release from Helion covering the War in the Pacific. I am looking long and hard at this from the naval perspective as it small enough to be practical as a solo endeavour - certainly from the gaming perspective - and in terms of the ships involved easy enough for me to model myself. Besides, there is the Huascar…. 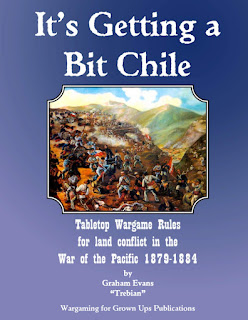 An excellent set of rules and with plenty of background material to kick off an army or two. From the pen of that well known Bon vivant, wit and raconteur Graham Evans aka Trebian

At this stage I have no plans around figures for the land side of the war but this would be ideal block army territory and aside from the Portable Wargame there is also the excellent rules produced by Trebian which have languished for far too long in the rules section of my library (and that actually came very close to being disposed of at one point - I am now glad I hung on to them!) and so need a run out at some point.

All in all then, what with England completing a clean sweep against New Zealand in the cricket, it has not been a bad couple of days!

Thank you for your very kind comments, David, and I'm delighted that you're enjoying the book so much.

It is very much like a box of chocolates consisting of all your favourites! Seriously though, after a cursory flick through the whole ‘digital and internet age’ vibe seemed to leap off the pages. We are very fortunate compared to those of yesteryear with our PCs, laptops, smart phones etc - all tools that would have been invaluable to the budding campaign designer. I recall giving Eric Knowles carbon copied movement orders using an A6 sized receipt book for the South East Asia WW1 naval campaign that followed Madasahatta - he used to hate getting these as there was inevitably loads of them from me! - as well as laboriously plotting movements on a map using a pencil and rubber. All great fun at the time but a darned sight easier to do these days!

For completeness I reckon a PDF copy will be called for….

All the best and very well done.

So far I agree with your evaluation (and don't expect to change my mind once I've finished reading it). It's been a long wait, and it feels like it was about four years ago that it was added to my Amazon wishlist, only for my wife to find that it didn't seem to exist when my birthday rolled around. Still it's finally here and well worth the wait.

The production quality seems very high, the binding is properly sewn, no gluing like too many modern hardbacks, and the paper is heavy duty and glossy throughout as befits a title with so many illustrations. However, this does come with one downside: it weighs in at 1.65 kg so you're going to need good wrist strength or only read in short bursts/sitting at a table. Given the tables and illustrations I don't fancy the Kindle version but a PDF would be attractive (though paying for both hardback and a PDF would get expensive).

All I can do is to echo your words, especially about Eric and Madasahatta. It propelled me down a path that has brought me great friends - like you - and turned me into a wargame designer and writer. Henry’s book deserves to be on the shelf of every self respecting wargamer.

PS. I intend to but the PDF edition as well so that I can ‘carry’ it with me whenever I’m away from home.

It is a tempting book, but already having the Featherstone and Bath books, plus the superb Warplan 5/5 maps, I think I'm OK as it is, as I've found these and my own narrative style tick all the boxes for me. Who knows but maybe one day I'll be given it as a present...

Just to add to my praise of the book's production quality: it actually has its footnotes - of which there are quite a few - where they belong at the bnottom of the page and not hidden away at the end of the chapter or, worse still, at the end of the book. This is not at all common these days (too costly no doubt) and the "modern" approach is why I often prefer reading e-books, despite their disadvantages for some non fiction.

A grand gift there David…
I may have to pick up a copy myself…
I’m also looking forward to seeing your endeavours in the Pacific War.

I have a Kindle version of the Compendium so getting the same for the Campaigns title makes a lot of sense for the reasons you mentioned. I will use it on the Kindle App on my IPad rather than my ordinary Kindle simply because it is far better for text, diagrams, illustrations and above all, colour!

It is funny how a wargames campaign fought some forty odd years ago could have such a lasting impact - all i can say is that I am pleased it did!

Many, many thanks once again,

You are absolutely right abut the weight! A PDF version would be really helpful for use on my IPad , especially when travelling or commuting (not that I am currently doing either!).

It is a well produced book again, for the reasons you mentioned which I particularly appreciate - shoddily produced books are a constant irritation for me!

The sheer panoramic scope of the book makes it doubly attractive for someone of my butterfly like imagination!

I have to agree with you - the clue is in the title, footnotes, as in notes at the foot - as it saves a lot of ‘back and forth’ whilst reading something, particularly if it is a complex passage referencing multiple things.

A lot of the Project Gutenberg stuff I have features footnotes so I gues it was fashionable historically, perhaps less so now for the reasons you mention.

The book was on my radar since it was first announced and as mentioned, I consider it to be a worthy successor to the works you mention. In many ways it is a case of it being the ‘same train, different carriage’. Featrestone’s Wargames Campaigns was always a favourite of mine and continues to be so.

I would suggest putting it on your Christmas or birthday list!

War plan 5/5 maps? I am not familiar with these so a spot of Google Fu is called for!

A grand gift indeed! I am really pleased to have a copy of this and needless to say the inspiration gene has gone into overdrive!

War in the Pacific will feature - I just don’t know when!