Balsa, MDF and Lashings of Glue…. 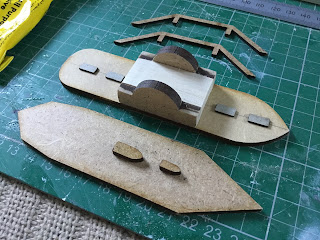 The model at the top of the picture is now ready for sealing, undercoating and painting - the hull at the bottom has not really had much done with it - note the two ship’s boats placed just so that you can see them. 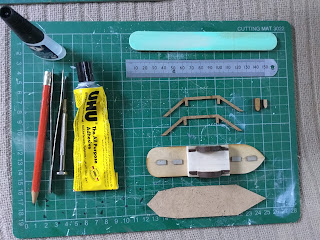 That may give a slightly better view - any thoughts on the hull template at the bottom of the picture?

A problematic kind of day - don’t ask -  but I was able to get some work in on the final batch of models for the ACW project. Now the sensible thing would have been to finish up the models already under various degrees of construction but, hey ho, a modest challenge presented itself and it would have been churlish to turn it down….

I also thought that it would be good to share the state of play of the build so far and of the ship’s boats that Warbases have come up with for me.

You seem to be making reasonable progress, and the models look very impressive.

The C.S.S. Selma was such a distinctive looking vessel I could not resist making one! Warbases did a sterling job of the framework so the rest of the model is fairly straightforward.

The hull shape above it is for the C.S.S. Mississippi - best described as a casemate ironclad on steroids!

Balsa,MDF and Lashings of Glue sounds like the strap line from a Carry On film…😁

You have a very neat little work space

It certainly has felt like a Carry On film at times I can tell you!

I am not going to lie - the workspace was staged as I had just finished what was I doing. Normally it looks like Steptoe’s yard after a hurricane…. ;-)