Revisiting a Test of Honour 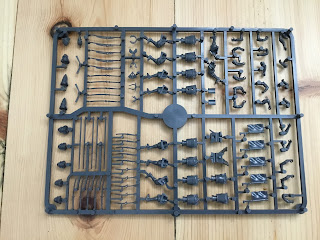 A sprue of Samurai on foot. There are plenty of options for heads and personal weaponry - a basic foot figure is made up of the torso in two halves, two legs two arms and a head and then you add the weapons of choice

I have spent some recently revisiting the Test of Honour Samurai skirmish game - the one that I had given away only for it to return some years later - and after having looked at it with a fresher and perhaps rather more objective pair of eyes I am thinking that it is not half bad! I am unsure as to why I did not take to it the first time around although I suspect it may have had something to do with the complexity of assembling the figures. These are 28mm hard plastic but are typically made up of around 10 or more separate parts - thank goodness you do not need that many figures for a game!

As mentioned previously, I will need to add a box each of Samurai infantry and cavalry as currently there is only 10 of each. This would be sufficient for Test of Honour but seeing as I am looking further afield into Lion Rampant territory I will need more of each. 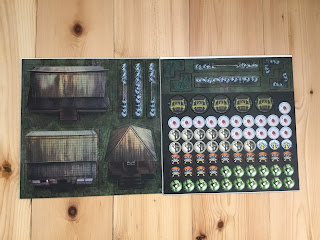 Terrain on the left sheet and at the top of the right with various game counters below. All the counters are double sided and so the small dwellings on the flip side are depicted as on fire.

The game itself itself is designed for a 3ft square playing area and it includes some press out card terrain tiles for the figures to fight over. There is now a substantial choice available of suitable dwellings and other terrain pieces (both resin and MDF) so acquiring a few bits and pieces would certainly not break the bank.

As to the figures themselves, obviously care and patience will be required in assembling them. Painting will be a challenge but given the low numbers involved hopefully it should not prove to be much of a problem (famous last words eh?).

I can see myself raising two regular forces and perhaps a third of miscellaneous Ronin types. I am seriously considering painting the two regular forces in the colours of Lords Toranaga and Ishido from James Clavell’s Shogun - mid brown for the former and light grey for the latter. In a moment of whimsy I thought perhaps some European types would add to the mix - certainly the book Shogun has some potential for this - which would open up a whole new dimension to the set up.

First things first though - for now I need to get some of the additional plastic figures (luckily I have a convenient birthday in two weeks time!) - and so I received the welcome news yesterday that my Warbases order in en route meaning that the ACW ships will once again be front and centre for the final big push to the finish line.

The figures are a bit fiddly to put together , but I have amassed quite a collection (the Perry figures are VERY nice) and have played the game a lot , solos well due to the chit drawing mechinisum .

To this day I am unsure why I became to disillusioned with the game - I really did not give it a chance - as it has the look of something really atmospheric for the period. I will take it slowly re the assembly as I have only ever assembled a single 28mm plastic figure - a Perry ACW infantryman from the original set - hardly in the same league of ‘fiddliness’!

The whole solo thing is also something that caught my eye as I had not joined the dots with this facet of the game originally. Would you know if there are many differences between the first and second edition?

In addition to the base set I have additional Ashigaru - both spear and missile, including one of the unit boxed sets - as well as cavalry. Although I need another box of Samurai, both foot and horse.

There are some lovely pieces of terrain available and being as it only needs a 3ft square playing area it is ideal for the man cave.

Another new period Dave? Are you sure this is safe?

It is not a new period as such - just a specific piece of another new period….

For the record I would only class a project as a new period if I had never gamed it previously!

(My tongue was firmly in cheek when I typed that).