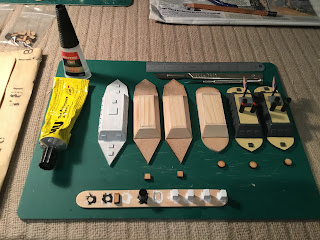 After having accrued rather a lot of brownie points on Saturday I was able to spend some time in the man cave working on the remaining models. The brushes stayed in their jar so centre stage were the knives, assorted files, pencil and ruler, my trusty bradawl, steel ruler and two types of adhesive. It was the turn of the casemates for three ships - two C.S.S. Atlanta and a City class gunboat.

My technique for building casemates is an exercise in brute force. A central block of the appropriate size then has the four sides angled up against them. The brute force element is the filing and shaping of the angles - and this is vigorous work indeed!

All was going well until one of the casemate sides of one of the Atlantas split along the grain just as I was filing it into position.

Oh flip I said. Oh shake my fist in anger I ejaculated! After much muttering under my breath and roundly cursing a cruel fate, I set about replacing the damaged side - this involved measuring out and cutting a new piece, all this after removing the glue etc from the original effort. It was swiftly done and after much flam and paradiddle the new piece was securely in place. All’s well that ended well but it did put me a little behind as I had intended to get the gunports and hatches in place as well but sadly time was against me.

The sealing and undercoating will follow and then of course, the final painting.

All coming along very nicely David and the post title made me chuckle!

Great work Dave, and what did you do to earn all those browny points?

Thank you kindly sir! I have to say that his final batch of 14 models seems to be taking an age to get finished but real life stuff has eaten into my time in a big way so it is hardly surprising I suppose.

It is all heading the right direction though. I am glad you enjoyed the title - a chuckle on a Monday morning is always a good way to start the week!

You are too kind old chap! Re the brownie points - probably no more than usual really but I was keen to get it out the way with!

Grand work David…
I look forward to seeing them launched…

Many thanks old chap! I realised this morning that once these are undercoated that all of the remaining models bar one (yet to be built) are actually just at the painting stage which is rather good news. A big push should then see them finished.

It is getting to that big push that seems to be the problem at the moment though!