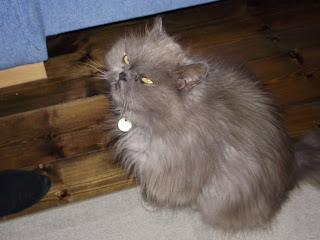 Not a wargaming subject I know but I would like to share this all the same. Misty, our beloved Persian had to be put to sleep this evening as his viral condition had taken too much out of him and his recovery was extremely doubtful. We are all feeling pretty down at the moment and his idiosyncratic ways will be sadly missed. His liking for sleeping in the laundry basket or with his head in anybodies shoes had been noted on many occasions - as had his irrational fear of silver foil. He often enjoyed sleeping on my lap upside down and with his paws in the air - looking like he had just been shot. SWMBO would spend hours grooming him and his attempts to avoid this were legendary. He was noisy and not the most agile of cats - his landing technique could best be described as a controlled crash - but he was a good friend and a cornerstone of the family.
R.I.P. Bubs (I have no idea why we called him that!) but at least the Magpies won't be able to get you now.
Posted by David Crook at 21:57

My wife and I were both sorry to hear about your cat. We had hoped that he would make a full recovery in time.

Thanks Bob and Susan. It was one of those 'for the best' scenarios that never feel like they are.

At least he is no longer suffering and we can take comfort from that.

That's a d*mn shame, David, it's always hard to lose a member of the family, however small and furry they might be - sorry for your loss.

Sorry to hear that mate - the little guys in our lives make a big impact and are missed.

Many thanks for your good wishes guys. Misty was a real character and the house seems very quiet without him.

Very sorry to hear about Misty. Pets are such a big part of our family - I understand your loss. We lost our Chow over a decade ago, and now have 2 other dogs. But - my wife and I still laugh at the goofy things our Chow used to do!

Many thanks for your kind words. It seems funny typing this without him laying with his great furry head on my foot! Life goes on but we will never forget him.

I hope another character joins your family in Misty's place

Just caught up with your sad news which I'm sorry to hear- having lost the dog earlier this year I know what a big gap they leave.

Many thanks for the kind words. He was certainly one of a kind bless him. I can't get over how quiet it is in the house!