Somewhere in the Black Sea....From the Bridge of the Evstafi 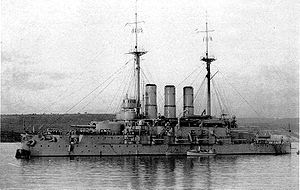 Marvellous, well written and an excellent essence of historical detail coupled with dramatic spice. I can't wait for both fleets to lock horns fully. Keep up the good work!

Many thanks for the generous comments. I enjoy adding a little narrative to the action as it makes it that little bit more believable. I am looking forward to finally fighting the action and will report in full as to the outcome.

Your scenario is exactly why I bothered to buy those 1/3000 Russian Black Seas models :)

Many thanks for the kind comments. The 1/3000th Bogatyr class cruiser - Kagul and Pamiat Merkerija is a lovely model, one of Navwar's finest IMHO. Re the scenario - I shall try to get a map on the blog with the starting set up if I am able and of course, the rules will be forthcoming in due course. I am enjoying your Pacific articles despite this not being my area - especially because the camera shots are very atmospheric.