Gotterdammerung in the Atlantic at some point.... 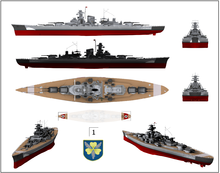 My visit to Navwar this Saturday will see the acquisition of the 1/3000th replacements of my recently departed Axis and Allies: War at Sea WW2 naval collection. Not the entire set up (at least not at the moment!) as that would be too large to obtain in one hit but it will consist of all the North Atlantic/Arctic types I will need. This means of course the Royal Navy and its German opposition. I have mentioned before that the familiar scenario of a German breakout into the North Atlantic by varying degrees of force and with the subsequent Royal Navy pursuit always makes for a great mini campaign (Operation Seeadler I ran a couple of years ago at the club being a good case in point) and so I am keen to tackle similar ideas in the future; together with the Arctic convoy run. These actions are helped considerably by the relatively modest forces (at the tactical level) and also from the lack of great fleets of aircraft; a complication for the Pacific gamer and no mistake!

Using this scale will have a big advantage for me in that I will be able to make use of my Hexon terrain (in much the same way as I have done so for the WW1 and Balkan Wars collection) and so in due course I will need to tackle the WW2 variant of the hex based MoBaS (Memoir of Battle at Sea) rules.

This is an opportunistic purchase in that I am only getting this kit because I will be in the area of the shop but I should point out that it has been on the 'to do' list ever since I disposed of the War at Sea kit. I will replicate the Mediterranean collection in time but this will be a considerably larger undertaking. The newly acquired models, after the inevitable inspection and admiring glances(?) will then go into storage until I am ready to undertake the painting and basing. Given my projected schedule of upcoming projects I should point out that Christmas 2015 is looking pretty good for this!
Posted by David Crook at 05:49

I did not realise you had shifted scales

I am trying to finish off my WWI and WWII collections before being drawn into world of "moderns"!

I look forward eagerly to your postings on the "Classic" WWII campaigns :)

More like coming back to 1/3000th! The War at Sea stuff, whilst very nice was simply way too large to use at home and I was very reluctant to have the same fleets in two scales. I use 1/3000th as you know for my Balkan Wars and Black Sea WW1 Russians and may add to the the Mediterranean stuff in due course for the Great War.

WW2 in the North Atlantic isan old friend and so I am looking forward to being reuntied with the theatre once again.

It goes without saying that all of this will find its way onto the blog in due course!