A Sharp Intake of Breath at the Backwards, Forwards Step 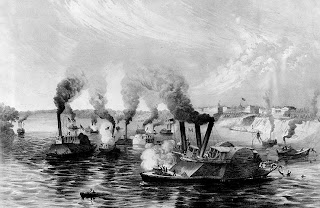 When I first embarked on this project I was quite happy to draft my own rules to use with the models on my Hexon terrain. The rationale behind this was that I wanted a set of naval rules that mirrored as far as possible the mechanics employed in the Command and Colours ACW game Battle Cry. A casual conversation with Bob Cordery at Skirmish last year led to both of us devising sets of rules based on a fusion of ideas from both Battle Cry and Memoir 44 called - after Bobs excellent idea - MoBaS or Memoir of Battle at Sea. These were not so much a collaboration - more like an idea that went in two very different directions.

My own 'spin' on this era has taken on the size of the proverbial camel (being a mouse designed by a committee!) and as a result is very far removed from the elegant simplicity of Battle Cry. With this in mind I have taken the conscious decision to scrap my existing set of rules (currently awaiting a play test) and go back to the drawing board with a much simpler set.

At this point I should take my hat off to Bob C as he is a very experienced rules writer and developer and after a brief email exchange generously acknowledged the sense behind my decision to redraft the ACW rules into something a little more in keeping with my original intention. I had been guilty of falling into the trap of assuming that writing a simple set of rules would be, well, simple. The rules for the ACW naval project have proven to be anything but as I think I have consistently 'over-egged' the pudding and have absorbed additional levels of complexity where I did not need to.

Stepping away from the rules for a few days showed me the path, so to speak and so the next set (which are actually very close to a first draft) will be much simpler and will sit alongside Battle Cry far more easily. I want the rules to occupy no more than two sides of A4 BUT I have bitten the bullet so to speak and so the rules will feature ship charts, albeit in a very simple form.

More to follow as and when the rules are at the draft stage and I will try and get some games in for the blog if I am able. Even if my own ships are not ready there are plenty of models available amongst the denizens of the club t be able to run a test or two.
Posted by David Crook at 21:06

It was a tough, but needed call to make really as the rules had not gone in the direction I wanted and to an extent were neither fish nor fowl as they were too fiddly for a 'simple' set and too easy for a more mainstream, traditional set. I am sure I will get there in the end though!

and I've no doubt you'll thoroughly enjoy the journey too!

You can your house on that! These mental exercises help to keep you fresh!