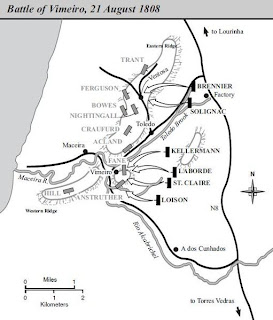 I had a very enjoyable game of Command and Colours Napoleonics at the club yesterday - Mr. Fox and I tackled the Vimiero 1808 scenario - and as a result have had my initial impressions of the game reinforced in the best possible way. The period 'feel' is outstanding and so my thoughts are already heading off into the far horizon with ideas and plans for scenarios and campaigns - the bread and butter of wargames.

The scenario itself was a very close run encounter and despite the 6 - 4 Anglo - Portuguese winning margin went right to the wire. In fact, for a long period the French had the opposition on the ropes - especially on their right flank, opposite the village of Ventosa which Mr Fox dramatically carried at bayonet point and thereby threatened the flank of the entire allied position. Fortunately for the Allies the French impetus on this flank was not sustained (due to a combination of poor cards and lack of immediately available reserves - and much muttering from Mr. Fox about the poorly placed cavalry reserve!) and so the timely realignment of the Allies was able to retrieve what was for some time a very tense situation. The centre was largely quiet with some long range artillery fire being the sole activity until some of the French began a half-hearted advance towards the Allied position. This was seen off in fairly emphatic fashion and certainly demonstrated the effectiveness of stationary British infantry uphill with a general to direct affairs! The scenario was decided in the centre as the piecemeal French attack was made a meal of, in pieces. In the defence of the French (and certainly not a reflection on the canny generalship of Monsieur Reynard) the cards they held were not particularly helpful in conducting a large scale coordinated offensive!

I am looking forward to seeing the expansions in due course - the Spanish are next which will complete the Peninsular forces - and I understand that a 'big battle' set is planned eventually for those Cecil B DeMille spectaculars beloved of most wargamers - Leipzig on the dinner table anyone?
Posted by David Crook at 20:35