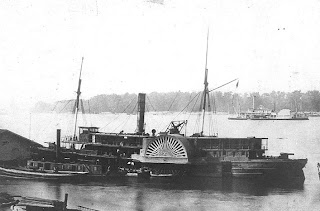 Well actually it isn't but you get the the drift! The next batch of models for the ACW naval project are nearing completion and the CSS General Earl Van Dorn is one of them. There are also two copies of the Genera Bragg (one Confederate and one Union - after they had captured her! She features in the picture above) and also a CSS Stonewall Jackson. I just need to fit these out and they will be ready for use taking the total of models up to 43. The final 7 models have been tweaked slightly - mainly because of the fact that I needed to make a couple of stern wheelers for the Ellet Ram fleet so there will be two of these, the three Union timberclads and another couple of Confederate gunboats.

I think I have now got my my ACW naval 'mojo' back after a very thin couple of weeks on the building front caused by multiple distractions!
Posted by David Crook at 19:59

Cheers old chap! I have surprised myself at the fact I have been able to sustain my interest for so long - usually I would have long since given up and moved on to something newer and shinier! I have had a couple of moments of weakness when the dark side has called....;-)

All the Battletech, I mean best....