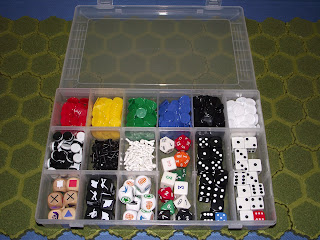 The new game accessory box - containing everything I am currently using for my various gaming adventures in one convenient place.

It has been a rather busy weekend with much activity in the man cave and elsewhere. To begin with, I was able to finish sorting and punching the last of the counters from Ironclads. This confirmed that all the pieces were there and they are now in some sort of usable order. I also took the opportunity to place the rules book - and that from the expansion - in a plastic display folder for protection. I may well scan the ship cards so that I can get two of these on a single sheet of A4 which will also be easier to store. That is certainly one of those jobs for when I have nothing else to do!

I also managed to get the new artillery, machine gun, mortar and anti tank artillery labels applied to the blocks for the brown, olive and grey sets so I am halfway there (just the red, blue and green sets). There are 36 blocks for each colour in this batch so it 108 in all. They take longer to do than the Command and Colours blocks simply because they are not die cut and so much work with the scissors is the order of the day.

We had a run out shopping yesterday and so I was able to pick up some more storage boxes including a smaller version than the ones I currently use for the block armies. The box you see in the heading of this post was purposely acquired to store all my currently used dice and counters in one place. Prior to this I had them in several different places and was always scrambling around to get everything I needed for a game in one place. Not any longer. Note the fact that there is no ruler or tap measure present! 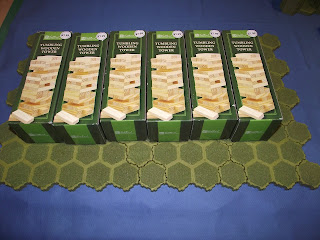 Another six boxes of blocks - just in case I need them!

I also took the opportunity to pick up a further half a dozen boxes of the wooden blocks I used as the basis for my home made block armies. I have no specific used for these just yet but figured that would probably change in time and so having them available seemed like a good idea. I will aim to have these sawn up next week at some point.

Finally, I have managed to acquire a couple of sets of the blue Heroscape tiles (42 in all) and a complete set of the tiles from the base game - meaning another 21 blue tiles making 63 in all. Ideally I would like to get a further three sets of these a this would give me sufficient to cover a 13 x 9 sized playing area so I will continue to haunt Ebay and see what else I can dig up.
Posted by David Crook at 05:57

Are you going to Skirmish on Sunday?

I was - now not sure but I hope to. I will know for sure later in the week.

Are the Rejects out en masse?

4 of us anyway, between 10 and 1 as myself and Ray are in work that night!

If I am there I will make a beeline for you lot!