This game is very much by the way of an experiment. To begin with, I wanted to try out using my Heroscape terrain rather than my Hexon, I also wanted to make use of single blocks and hit markers and finally, I am also breaking with tradition slightly and using the command cards from the second edition of Battle Cry. Essentially then, this is a game of Battle Cry, albeit in 3D. The scenario comes from the first edition though. I am quite taken with the size of the playing area the Heroscape playing area gives - certainly very handy and easy to move around - and although the terrain is a little bit of a lash up at present I am genuinely excited by the prospect of using this alternative to Hexon. 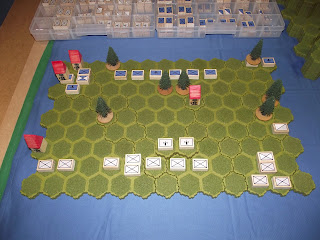 The initial set up with the Union forces at the top of the picture. Note the Confederate artillery on the hill in the right centre foreground. 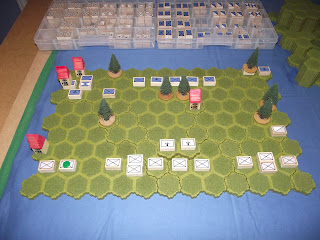 Turn 1 - First blood to the Union on the Confederate left flank - from long range artillery fire. 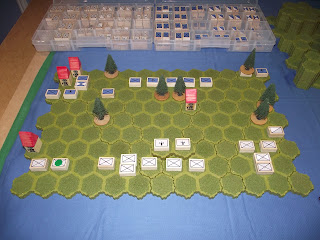 Turn 2 - The Union and Confederate right flanks attempt to advance. 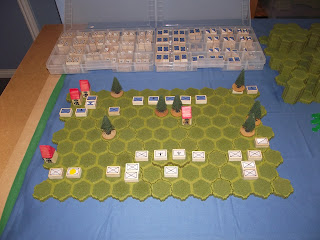 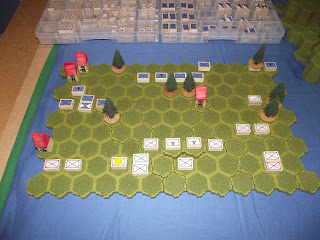 Turn 4 - As both right flanks continue their respective advances (the Union with rather more coordination) the Confederates reorganise their left flank. 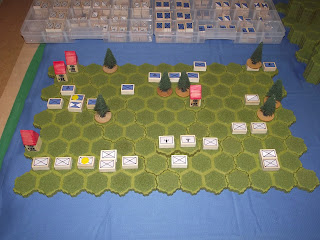 Turn 5 - As the Confederate left flank shakes out against the the rather more bunched Union forces (and inflicting some long range casualties at the same time) their cavalry probes forward on the right. 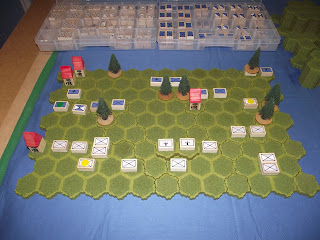 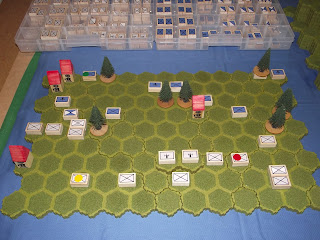 Turn 7 - The Confederate advance continues on the left and the Union forces suffer casualties and are being pushed back. However, on the other flank the Confederate cavalry are destroyed and their infantry attack is blunted. 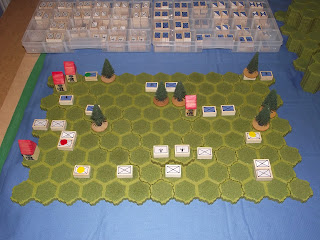 Turn 8 - Despite losing their commander the Union right flank troops hang on by their fingernails and absorb the Confederate blow. Enthused by their success on their left flank the Union infantry advance. 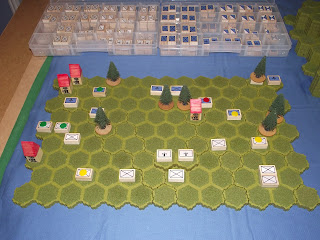 Turn 9 - The Union Right flank fight back against the assailants inflicting telling casualties whilst the Confederate artillery punishes the onrushing Union infantry. 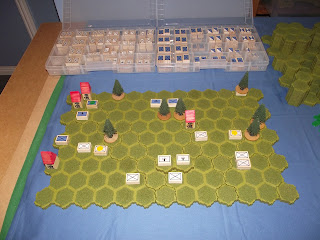 Turn 10 - The battle on the left flank grinds to a standstill but critically, the Union forces on the Confederate right are defeated and despite a heroic defence, they are beaten. 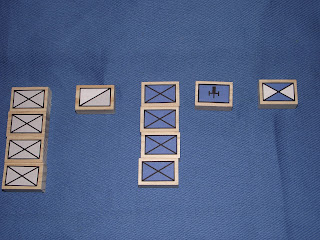 The final scores: 6 to 5 in the Confederate favour.

It was a very closely fought action right up until the end but the Confederate advantage in having more troops in the centre proved to be the critical difference as they were able to reinforce either flank far more readily. Having a strong central position - two artillery units on a hill - acted as a shield behind which the Confederates could reform as required.

Using the Heroscape tiles was really good fun and I was able to fight the battle seated at my table with everything in reach which was handy (especially as I have been having trouble with my left knee and ankle!) but I will need to rethink the terrain slightly as I can only comfortably use the smallest buildings and trees as anything larger overhangs the hex. With the command cards the game played out very well (it is actually the first time I have used them solo so my avowed intention NOT to use them has been firmly refuted!) although it seemed to have a lot more game turns. It still only took an hour or so though.

The use of hit markers rather than removing blocks worked well and so all in all it was a pleasant experiment  and the potential of this small scale version of the Command and Colours system in 3D is one that I will definitely explore further.

Since you have enough tiles to cover a larger area then you can consider scaling the game up from a 13 x 9 grid to whatever you desire.

You could add a 'Far Left' and a 'Far Right' on the flanks and perhaps allow left and right cards to do either but not both.

You could have a 'Left Centre' as well as a 'Right Centre' giving a fighting area with six sectors rather than three.

I really like those block elements, me an Ray were saying how it would look in the gatehouse set up over a shift as we played and painted!

An interesting type of game Dave.

Funny you should mention that - I have more than sufficient Heroscape to handle Command and Colours Epic Ancients and the Memoir 44 'Breakthrough'style scenarios so your suggestion is certainly a very timely one!

At this stage I just wanted to see how a 13 x 9 would look so I was pleased with the visual aspect for sure. As mentioned I will need to give terrain some thought and funnily enough it has also made me think about the figures option as well - I reckon that 10/12mm would be absolutely ideal for this scale of hexed terrain.

Pure Command and Colours (in this case Battle Cry) sans the figures and in 3D. It takes up very little space and is very quick and easy to set up.

I enjoyed the scenario as it was close right up until the final turn and involved much activity on the flanks rather than all in the centre.

You could almost pack a wargame in with your sandwiches it is that compact!

The great thing for me with the blocks is the sheer versatility they provide me - the grey blocks used for the Confederates for example, will also furnish the units for WW1 and WW2 Germans as well.

I am doubly pleased to read this. Not only have you played a game but the Rebs won! Yee-har! Biased, who? Me?

They certainly did but it was a close run thing. The Union artillery facing off against the Confederates on their left was very effective and almost singlehandedly blunted the Rebel attack.

It was good to get a game in and I plan to get a further three in this month to bring me back on schedule.