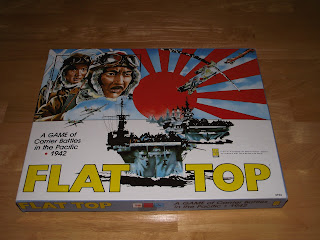 This morning saw the arrival of a copy of the Avalon Hill edition of Flat Top that I managed to source from Ebay. As mentioned previously, I wanted a copy of this game for use as a kind of campaign tool with the intention of it going with the 1/4800th scale Pacific collection (that is the one that I have yet to acquire of course). The Avalon Hill version (the second edition) expanded the original Battleline game with additional ships and a slightly larger map area requiring a two page plot map. Although the counter count weighs in at 1,300 or so it is not a game that has great skyscrapers of counters on the board, in fact the counters are largely deployed on task force cards with but a single counter representing them. The plot maps are of pivotal importance in the game and of course have uses far beyond the actions of 1942 - and I fully intend exploiting them accordingly! 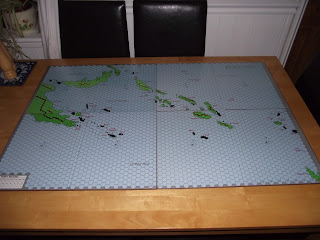 The mapboard - as you can see it is rather large! 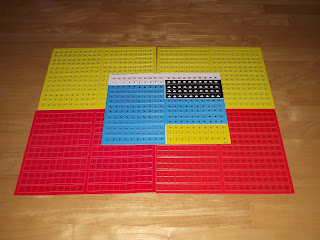 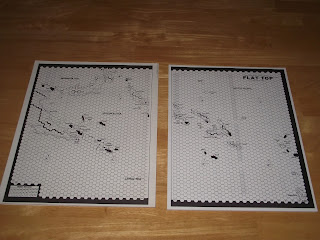 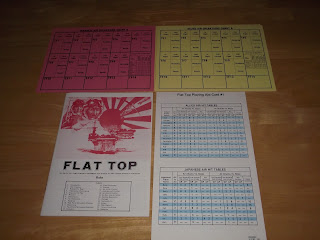 The game is in absolutely pristine condition and I hope to make much use of it - both as a campaign tool for miniatures battles and as a classic boardgame in its own right.

You realize that once you have opened that game there is no way to get everything back in the box! Well, maybe if you don't punch out the counters you can.

The counters are unpunched and you are absolutely right about not being able to close the box!

I will probably decant the counters into a separate tray but there is something to be said for the sheer weight of the contents - it is somehow refreshing in a value for money kind of way!

Now go and play that absolutely fantastic game .. preferable during a very long weekend ... and add one more game to the equation and then run the game gamemastered ... 3 rooms two teams and a GM team. Written SOPs for all non-command units.. (get the General with the GM rules or find the on the webs) Best war game experience i ever had..

Back in the day a gaming friend and I regularly spent entire weekends playing this classic - not in the way you describe though. Your suggestion sounds like a lot of fun though and so is something I would love to try at some point!