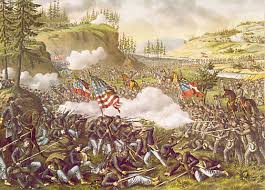 Chickamauga 1863 - one of those wonderfully evocative ACW lithographs produced by Kurz and Allison - Kurz and Allison . Now an army painted in this style would be something to see and using Spencer Smith miniatures may be just the way to  do it.

After two ACW games on the smaller Heroscape tiles and with single block units I decided that the next two would be fought on the full sized Hexon terrain. This will make a batch of four games using Battle Cry (the first edition of the game but with second edition command cards) in its original form, command cards and all. A brief description of the actual battle can be found here: Chickamauga and again, it is a battle that I need to research further - in fact along with most of the ACW. As an aside I would like to get hold of a good single volume history of the war and luckily there seems to be no shortage of choices available.

The forces comprise the following units: 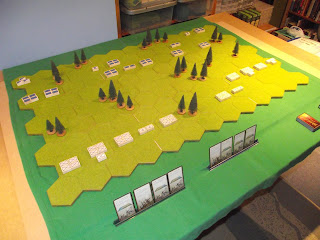 The initial set up with the Confederates at the bottom of the picture and the Union at the top. 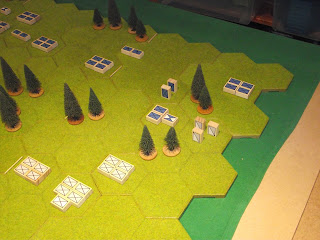 Turn 1. The Confederates advance on the right flank, led by the splendidly named Leonidas Polk. The Union  infantry take casualties (indicated by the blocks standing upright) but the marauding Confederate cavalry, caught between two fires, is defeated. 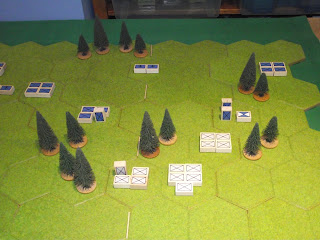 Turn 2. The Confederate right flank attack continues with Union casualties mounting although not without loss in return. A dangerous gap appears in the Union line. 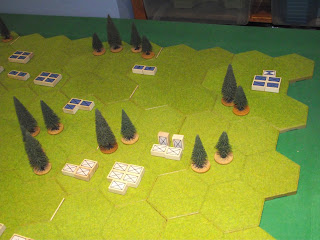 Turn 3. As the battle on the right continues the Confederates come under Union artillery fire whilst General Thomas joins a unit in the rear of their position. 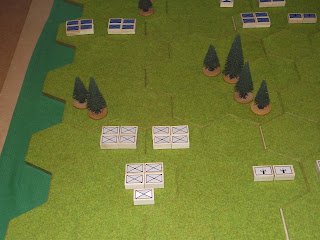 Turn 4. Meanwhile on the left flank the Confederates under Longstreet commence their advance against the Union troops under McCook. 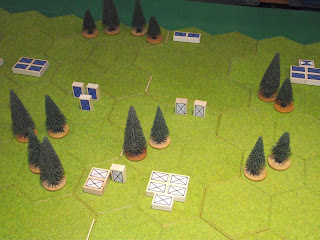 Turn 5. The fight on the right continues with the Confederate attack stalling but not without inflicting damage on the thinly stretched Union. Note the Union artillery has been pushed back under pressure from the lead Confederate unit but not without a deadly retaliation. 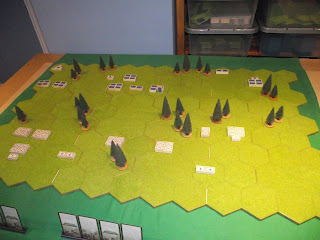 Turn 6. By mutual consent a lull falls over the battlefield as both sides prepare to make the next supreme effort. 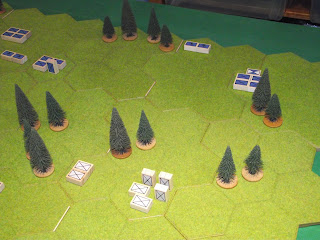 Turn 7.  After the briefest of rallies the Union infantry on the right under Thomas advance and, together with their artillery, inflict telling casualties on the Confederate troops under Polk. 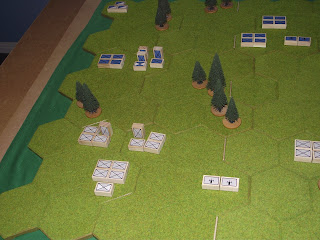 Turn 8. The Confederate attack under Longstreet on the left makes heavy weather of attacking the opposing Union troops under McCook. 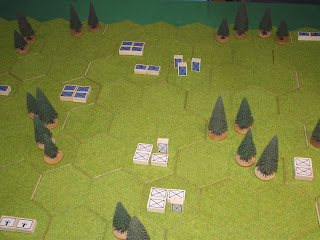 Turn 9. In the centre an under-strength Confederate attack commences and makes some headway initially but with irreplaceable casualties. 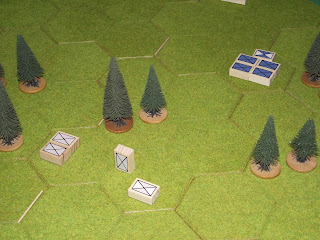 Turn 10. Meanwhile on the right the Union counterattack under Thomas continues leaving the Confederates under Polk in disarray. 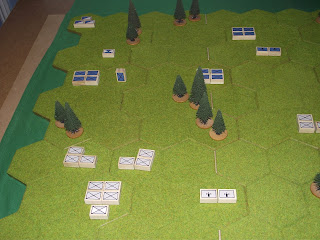 Turn 11. The Confederate attack on the left is content to merely trade long range shots with the Union and begins to prevail. 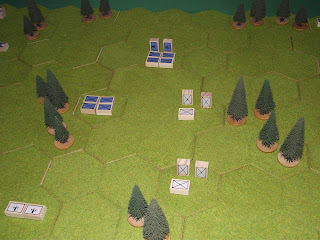 Turn 12. Despite destroying the Union artillery the Confederate attack in the centre falters under heavy casualties. However, is it too little, too late? 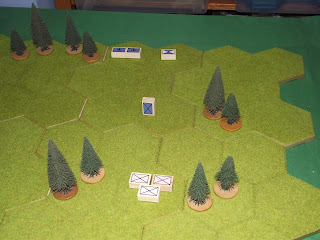 Turn 13. With a degree of desperation a scratch force of Confederate infantry is assembled by Leonidas Polk and administers the coup de grace to the last Union counterattack. The Confederates have won but at a  significant cost and are no position to exploit their victory. 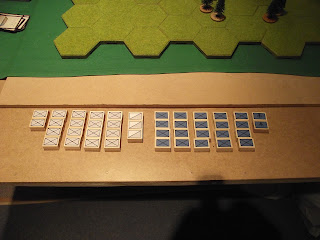 The final count. Turn 13 could have gone either way and had the Union gone first in the turn the result could have been different - they needed two more hits but the Rebels needed but a single one.

It was a very tight game right to the finish and the pattern of the action seemed to be very much 'attack-counterattack-pause to regroup-move to another sector-repeat'. The whole thing felt very 'ACW-ish' but I was not happy with the Battle Cry victory conditions. Basically it was the first to six units (flags in the game) which kept the action firmly to my mind in the 'game' category rather than the 'wargame' one. It is a personal thing I know but my fondness for scenario driven games with varying victory conditions is well known - at least it should be as I have banged on about it often enough! Certainly using a variable exhaustion level (similar to that I used in conjunction with Bob Cordery's Memoir of Battle) may be a viable short term solution but I will need to give this some further thought.

It was good fun overall, played well and it looked fine with the blocks and augurs well for the future.

Looks like a fun game, I gotta say I do like the counters/pieces, what a great idea, very easy on the wallet as well!!

Hi David,
I live about forty minutes from the battlefield, and would be glad to give you a tour any time you can get to "the colonies". The National Battlefield Park is huge, with lots of markers for the units involved, but being a two-day battle, it can be confusing as to where a unit was on day one or day two.
An excellent volume is available on "Wargames Vault" for download, called "River of Death" by Brad Butkovich. It contains a dozen scenarios from the battle, and extensive OOBs.

Using Jenga blocks cut in two with sticky labels designed using MS Paint has been a bit of a crusade for me but I am really pleased with the end result. I have been able to game actions I would never have been able to if relying on using painted figures simply because I am a very slow painter. As the blocks use standard military symbols the look is very much akin to a 3d military map!

Many thanks for the very kind offer and should I ever get to the 'colonies' I will happily take advantage!

Thanks for the heads up re the Wargames Vault as the more ACW battles I fight the more I realise just how little my knowledge of the period is.