Hex Options and Going back to where it all began.... 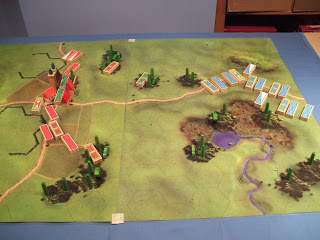 Six years ago a game fought using the Axis and Allies maps and the original block armies. A fuller account can be found here Belgium, June 1815....Game number 1


The recent rediscovery of the Axis and Allies maps has been a real bonus for me for the various projects I have planned. Obviously the first thoughts I had extended to WW2 and the ACW but to my mind there is no reason why they should not be equally useful for anything from 1700 onwards. Certainly the Napoleonic Wars and the AWI are two that spring to mind as well.


I did a little research into the original Axis and Allies game and found some PDFs of extra terrain types that can be used as overlays. That is fine but I was thinking more along the lines of some MDF hexes. I priced some of these up at Warbases and came up with a prices of £1.20  for 5 which is pretty reasonable. I was thinking along the lines of making 3D hills, woods and villages to either be used instead of the printed hex on the map or as freestanding pieces.

Then of course there is also the Rafm Hex Transfers mentioned in an earlier post Alternatives to Hexon and Heroscape that I will also make use of. If I am honest for what I want to game the 3” hex is a better proposition for me as opposed to anything larger it is more space efficient. I rather like the idea of using free standing terrain hexes so I shall need to order a few in to experiment with. Originally I had considered using the hex transfers on a cloth but I am now thinking that using a hard painted surface may be a better idea. Putting together two pairs of boards – one for the desert and one for Eastern/Western Europe – should not be too difficult and would have the advantage of being easily storable.

There were some interesting looking games at salute that used hex terrain. Sometimes it can look a bit odd but their setup (and yours of course) look pretty good.

Gridded playing surfaces are not to every gamers taste but given my love of board games it is no surprise that I prefer them. Oddly enough I think they look better with more stylised terrain rather than the usual diorama style of terrain one usually sees.

I suppose as the playing area is abstract then there is little reason for the terrain or even the figures used to be otherwise.

I have a love-hate relationship with hexes.

At one level they're wonderful.

But, as soon as you put models on them the little, niggling problems of model scale to ground scale ratio rears its ugly head.

I have no problems with hexes but then that may be because I enjoy boardgames. I don't tend to worry about the model/ground scale as such - as long as it looks OK it is fine by me.

(I can almost see the villagers gathering with flaming torches and pitchforks at this heresy....).

They certainly make life easier in respect of movement and ranges.