Historical Boardgaming and Axis and Allies 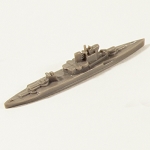 I have to say that I am very impressed with the service from Historical Boardgaming as the order I placed with them last week has arrived this morning!

If you recall I wanted to add some additional ships to the Royal Navy and the Kriegsmarine, simply because the available range from the various editions of Axis and Allies is very limited. I will be honest I was a little apprehensive about how the Historical Boardgame original pieces would compare with the Axis and Allies types but I needn't have worried, they are fine alongside each other and will mix in quite happily. I would say that the Historical Boardgaming pieces are probably more detailed but not outlandishly so.

The plastic used can best be described as a rigid polythene - very similar to that used in the pieces from the game Power by Spears Games - so will take painting and basing readily enough. I noticed that a couple of the KGVs have a little warp in the hull but I suspect that is nothing the old 'hot water bending technique' could not fix. In any event I am only planning to use 3 out of the 5 models. 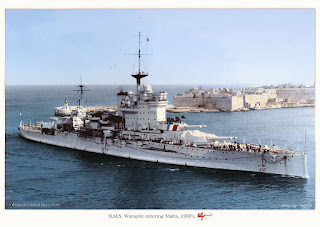 The real thing entering the Grand Harbour of Malta during the 1930s. Note the aircraft recognition stripes on B turret - as I recall this was adopted during the period of the Spanish Civil War.﻿
﻿

The tribal class destroyer is a nice model as is HMS Warspite - both of these are from the Axis and Allies Pacific game and are used to represent the ANZAC forces. The S class destroyer I already have and so the RN will have eight of each. The sole German destroyer is a Type 1934 Maas class although Historical Boardgaming do feature a Narvik class should I fancy some of them.

The biggest omission from the Axis and Allies ship range is that there are no light cruisers. Historical Boardgaming include a few but surprisingly none for the Royal Navy. I may look to do something about this in due course but for now I have sufficient material to give a number of interesting games.

One of the things that occurred to me was the option of using commercially available ranges to cover those ships not currently available. If there is something that I desperately need I could go down that route I suppose but if I am honest it kind of defeats the object of what I am attempting to do - namely produce a WW2 gaming set up using the contents from boardgames.

I now have all that I need to tackle the Royal Navy and the Kriegsmarine so no more excuses - on with the painting!

That is the plan for the weekend once the last bits of the decorating have been completed.

I shall be using my usual method of black undercoat, dry brushed grey and blocked in decks and boats. the bases will be labelled with the ship's name and will also feature the appropriate naval ensign.

I am looking forward to tackling them and getting them on the table at some point.

I am expecting to see small bits of plastic card come out and you to do some nice little conversions ;)