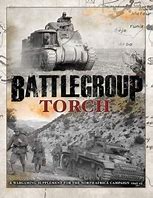 Picked up at Salute and a valuable resource for my plans.
﻿

I mentioned in my last post about the WW2 land side and how best I would be tackling it. The main rules I shall be using are Rommel, Battlegroup and of course the Portable Wargame. The one thing I did not mention though is what I would be gaming as effectively there are two scales in play. I have been thinking about this a lot and so have decided that Rommel - which will using a 1/300th and 1/600th fusion of models - will be used for actions set in the late war, either Western or Eastern front. Battlegroup however, will be used for the desert via Tunisia.

My reasons for choosing Tunisia for the Battlegroup option rather than the earlier period in the desert are many but certainly one of the main ones being because I can add the Americans in to the usual mix of British/Commonwealth, German and Italian forces. There is also a very good selection of kits available for all sides and it also means I can use the infantry figures from Axis and Allies (of which I have a huge number!). 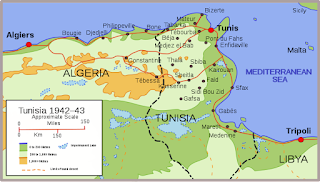 The theatre of operations - seapower played a decisive part in the outcome of the campaign.
Mention of the kit or even kits for the period is an important one for me as I have had a hankering to make some models for some time. Tracked vehicles are not the holy terror of years gone by with rubber tracks and a gazillion road wheels to fix in place - Armourfast and the Plastic Soldier Company have seen to that - so I am looking forward to this part of the project. The scale of games in Battlegroup is such that I will not need great carparks of vehicles to have some interesting actions and besides, what's not to like about any campaign where Lee/Grant and Tiger tanks appear!﻿
The Tunisian Campaign has a lot of potential for me in terms of gaming and the variety of kit in use and so I am confident it will provide me with plenty of things to think about when I get to it.

I was very tempted by the Torch source book when I was at Salute. I talked myself out of it (silly boy!) but I know I'll end up buying it eventually.

I missed out of the Salute pre order deal although the very nice man who runs it honoured it on the day so I got my freebie Stuart tank kit (and very nice it is as well!).

For me 20mm will be the way to go and I am looking forward to bashing some kits in due course.

If you get it you certainly will not be disappointed!

love love LOVE the Battlegroup rules - I have every book released thus far and they are my go to rules set for Plt+ WW2 gaming. I cant wait for a copy of this to wing its way to the antipodes!

I will be very interested in how you play this out. Torch is a fascinating campaign, and I am curious about the Battlegroup rules. Keep it coming!

Whilst I do not have the entire collection I am hugely impressed with them. They will be something to savour when they get to the top of the project pile.

It will be a while before I get to this but I am looking forward to it. Torch is a fascinating campaign in many ways as you rightly say and there is plenty of potential for some interesting actions therein.