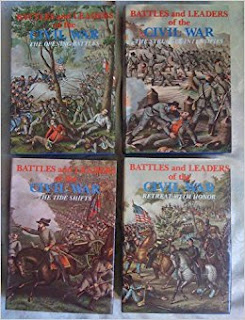 A project tipping point - more scenarios than one could shake a 1861 Springfield Rifled Musket at!
﻿

In my last post I mentioned that I had been after a set of Battles and Leaders for some time. This is true up to a point. I wanted a set ages ago and then decided - somewhat rashly as it turns out - that I was severing my ties with the ACW entirely. So I did. All of the books I had acquired as well as the models and boardgames were all disposed of and so the Blue and the Grey had disappeared from my consciousness.

I have enjoyed a love/hate relationship with the ACW over the years (mainly due to some horrible rule sets that prompted my somewhat hasty disposals) but have grown to realise (again) that as a wargames period it offers much to commend it. It is well supported with books, rules, figures and board games to start with and so getting into the period would be very easy. It could be tackled as cheaply or as expensively as required and most importantly offers a large variety of challenging scenarios to game. Critically though, it includes viable combined arms style operations along the rivers and coastline. 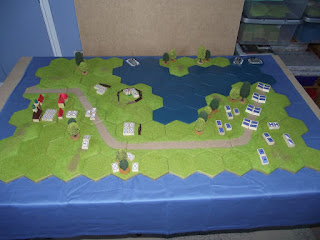 The Battle of Fort Duvet on the Yahoo River 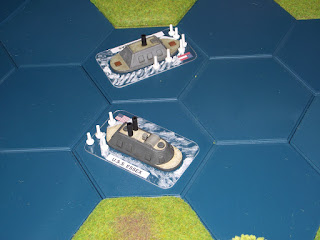 Scratchbuilt models of the USS Essex and CSS Arkansas trade blows - the latter came second and was duly sunk. 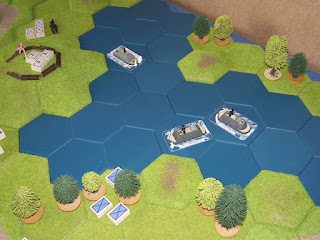 As the Union forces advanced so the USS Carondelet and the Essex attempt to engage the Fort Duvet on the Blueberry Bend.
﻿

Back in the early days of this blog - when I was going through my ACW 'love' phase as opposed to the 'hate' version - I embarked on a massive scratchbuilding program to churn out some ACW ships for use on the rivers and swampy bayous in conjunction with the block armies and actually fought some very good games using them with Attack on Fort Duvet, 1862 being a good example (God was that really 5 years ago?!). Whilst the ships have gone (and have been replaced with Peter Pig 1/600th models) the block armies have remained.

For a variety of reasons though I am unlikely to tackle the second half of the 19th century from a European perspective - my interest in the continent effectively ends in 1815 (even allowing for the Russo-Turkish War) - but I am interested in warfare during the period. I could tackle colonial small wars stuff for sure (and fully intend doing so - hence Congo and The Men Who Would Be Kings) but the war that ticks most of my boxes in respect of scale and scope is therefore, by a process of elimination, the ACW. The wars in South America could have offered an alternative but for some reason do not engage me in quite the same way as the war between the states.

I came to this conclusion over a period of about 18 months and so at the end of last year I made my first tentative foray back into the period by acquiring a copy of John Keegan's book on the American Civil War as a primer. I still had a selection of Peter Pig ACW ships and a pile of their 3mm troop blocks (very nearly disposed of in the 'cull'), not to mention their Hammerin' Iron riverine naval rules so that would represent a start.

For the land side I am thinking that the wooden block armies will suffice to begin with although I would like to tackle some figures at some point - this would be a long way off though.

As it stands then I have the models for the naval side, metal troop blocks for the armies should I wish and the ready to use wooden block armies. I could fight land battles immediately if I wished which is ironic in that the WW2 project is front and centre of my efforts at present. Painting the ships would make for a nice change from the WW2 stuff if required though.

So what of Battles and Leaders then?

Well, from the minor flirting with the ACW once again occasioned by John Keegan's book my surprise acquisition of the above series courtesy of Dave Lanchester at Salute has moved the ACW back in from the shadows to sit along side the WW2 project. This will serve initially as an alternative period for when my notoriously short attention span starts flagging and a distraction is needed. Without a doubt the inspiration Battles and Leaders will provide is immeasurable and so I am sure it will generate many ideas.

I never expected to be coming home with this collection from a wargames show but now that I have I am glad that I have - I am sure it will spur me on to accord the period the attention it deserves - I am a sucker for historical accounts from participants et al as they really add to the flavour of what one is trying to game in my opinion. At the very least it will serve as a reminder of why I should game this period rather than be put off by mere sets of rules.
Posted by David Crook at 11:05

Great read. I'm so tempted by Peter Dennis' paper soldiers - 'Paperboys' what a great title- I have the war of The Spanish Succession book on my 'to buy' list soon as it comes out. I have watched his 'cutting out' video on YouTube and it looks challenging but rewarding, takes me back to the early days of German flats, but kind of other way round.

Re Battles and Leaders, I bought my copy 30 odd years ago and passed the 4 volumes on to a Kent charity shop only about 3 weeks ago. A brilliant read, had to seriously reduce the amount of stuff we could bring to Spain so gave away a large military book collection including Chandlers 'Napoleons Marshals' ..... people are going to grab a lot of bargains :)

Hope you still have your copy of Bloody big Battles.

There are a fair number of scenarios for ACW on the Yahoo group.

I hope the move went/is going well. I always haunt Charity shops for 'stuff' and have come up with a few gems over the years. Which part of Kent should I be heading to? Like as not I reckon all your goodies would have been snapped up by now!

The paper soldiers looked really good and whilst I have not thought about using them the Trafalgar version has some potential for me....

Yes I do (yet another repurchase....) and know that the Yahoo group is a goldmine for scenarios. I shall take a good look over the next few days.