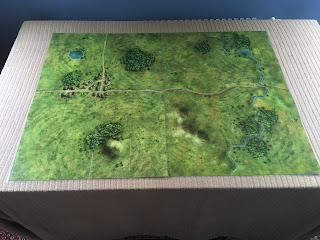 The two maps I opted to use giving a playing area of 15 x 10 hexes. The Confederate forces will be deployed in around the small town on the left with the Union advancing on a broad front after having crossed the small river on the right.
﻿

Before I describe the battle that I will be fighting as part of my ACW renaissance I wanted to post some pictures with the actual set up so that I could set the scene. If I am honest taking pictures under artificial light using the laminated Axis and Allies maps is a horrible experience as the glare is awful. This weekend was a challenge because it was so dank and overcast that I had to abandon the attempt to fight the action simply because photography was so difficult. My man cave has two roof windows that under normal weather conditions makes for a very light and airy space. However, because of the angle of the roof it means that the lights tend to funnel straight down rather than diffusing. This means that if using artificial light you have a very well lit area but at the cost of reflected glare on any shiny surface. Going forwards I will need to think about to reduce this so that the maps are more photograph friendly. 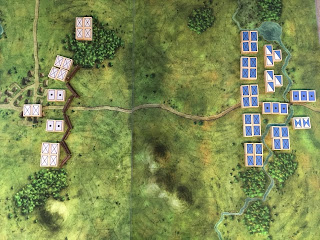 The forces deployed for the start of the action. The Confederates also have an additional infantry unit and a cavalry regiment deployed to the rear as a reserve (see the next picture). The fieldworks can be clearly seen between the two small woods to the north and south of the town. The Union forces have deployed for action from their marching order after having crossed the small river. 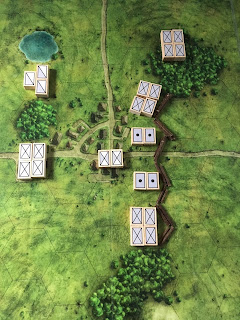 The full Confederate force. The artillery is deployed to have a wide field of fire and is not only fortified but has infantry on either flank as well as the woods. It is a good position but for the open ground north of the woods above the town and the hills (see the picture before the above) that dominate the town. 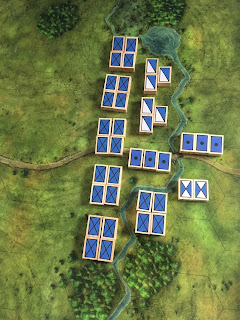 The Union forces deployed on a wide frontage thereby giving them the option to favour either flank whilst pinning the main the Confederate position. Note the 3 point artillery units meaning that they have greater staying power than their Confederate counterparts.
Whilst the Union forces outnumber those of the Confederates they certainly do not possess an overwhelming numerical advantage. They will need to be careful how they attack as they cannot afford to sustain too many casualties so they are really forced to seek a flank to exploit. The Union artillery could have a substantial impact on the outcome should it be able to secure the hills so the Confederates will need to mindful of this.
The Confederates, given their numbers, have deployed sensibly and have prudently kept a small reserve to help counter any flanking attempts. Whether or not this will be sufficient remains to be seen.
I am really looking forward to fighting this engagement and whilst the dialogue above has been rather bland in content, the after action report will resume its full purple prose vigour!﻿

I like the look of this ... and the glare didn't look too bad to me.

I'm interested to see how the battle pans out.

The set up shots were Ok but then the sky went black and it all went wrong from there! I want to take pictures of the action as it develops so I will run the game over the bank holiday weekend as the weather is supposed to good then. It is all set up and ready to go though but I want to make sure it looks right and is blog friendly.

I have formulated credible plans for both sides to use for the action I am hoping this works out as planned - in any event I am really looking forward to it!

Nice looking game. I did like the GW games of this sort of type.

Many thanks old chap! I am not familiar the GW series although perhaps it is something I should look into - do you have any further information?

I love your block armies. I'm looking forward to see how this game develops.

Many thanks old chap! The plan is to fight the action at the weekend (bearing in mind it is a bank holiday)and naturally it will feature on the blog.

For the umpteenth time I am so glad I persevered with the block collection - they have been so useful and were a doddle to assemble.

Nice feel of classic "kriegspeil" about this David :)

Many thanks old chap! I know that blocks are not figures but they have a distinguished part in the history of the table top wargame.

Besides, they are a lot cheaper to buy and easier to put together!