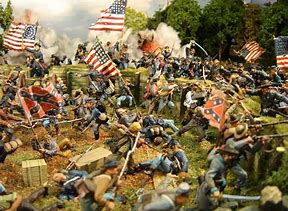 High drama between the Blue and the Grey
﻿

I have gone back to basics with the ACW and am treating it as a new period for me to game in - in reality it is most definitely not but I want to be a little more systematic in my approach this time around. With this in mind I am reading John  Keegan's history of the war as an overall primer to set the scene. Battles and Leaders will serve to support the Keegan title for the finer detail in respect of the actions fought and indeed, will be used as a reference source. My interest will focus on the Western theatre as I am very interested in the campaigns including the rivers and swampy bayous - I have a selection of Peter Pig 1/600th models to assemble and paint for this - so I fully expect to be adding to the library in due course. 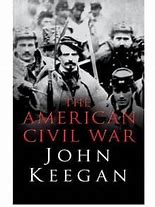 My commuting companion at present - I have the hardback version - and I have to say it is a very good read.
﻿

Given the thousands of publications about the ACW it would be very easy to throw cash at lots of things but I want to keep the collection fairly compact if I can. I tend to find this works better for me having a smaller library to refer to - my 1815 collection for example is under ten books. I shall look out for a good uniform reference and a couple of specific Western theatre histories, probably a couple of nautical themed volumes as well. Throw in the odd Osprey or two and there you have it.

My throw away comment about going back to basics and being a little more systematic in my approach are valid points and for reasons that are actually quite embarrassing. I wince at the thought of the amount of time and money I have wasted over the years on the ACW - from figures, rules, books and board games - all acquired and disposed of with dizzying rapidity. I want to make sure that this time it sticks - and why should that not be the case? It is, after all, a fascinating period, blessed with sufficient variety to appeal to even the most particular of gamers.

The land actions I shall fight will be tackled initially using my block armies and the Portable Wargame or similar although I shall be using hexes rather than squares. There are plenty of scenarios that can be readily adapted from the Battle Cry Command and Colours game - even more if you raid the net -  and of course the campaign potential tied in with the river gunboats is even more attractive. The key thing here is that I can game ACW land battles easily and at short notice

As to figures I am currently not even thinking about this as it would be well down the running order with everything else I have underway. Using the block armies and the Axis and Allies maps is an immediately available option although I may look to figures at some point. The important thing is though is that I do not have to worry about this as the blocks are a perfectly acceptable alternative. If anything I am likely to tackle the ships first but again, there are a few other things higher up the to do list, the WW2 ships being the case in point.

By approaching this in a methodical fashion I am hoping to ensure a degree of longevity with the period - just don't ask me to use Johnny Reb for a game!

I'll have to treat myself to that Keegan title at some point.... mind you it'll probably just join the growing pile of unread books on my desk!

You can pick the paperback version up cheaply enough - but don't stick under your desk, it is worth so much more!

There are a lot of good memoirs, Sherman's are available as a free ebook and I'm sure there are more. That way they don't clutter the shelf bit the memorable bits stick.

I wish you much joy of this revisiting.

I shall have a look on good old Project Gutenburg for my Kindle. As I recall Mahan covered the Gulf and Inland Waters which will be a good place to start methinks!

I am keen to make this work this time around as the ACW has an attraction for me that the European wars do not quite match.

I am currently playing chess via a phone app with a retired history teacher in Atlanta that specialised in the Civil war period so I may well tap him for some suggestions!

Best wishes for the ACW project, time my Airfix and Peter Laing figures came out again for 2018. Mark Man of TIN blog,

Many thanks for the link which I shall certainly be checking out over the weekend. Airfix and Peter Laing eh? Now that will be something to see!

I hope to be running a small ACW action using the block armies with the Axis and Allies maps as well which will appear on the blog in due course.