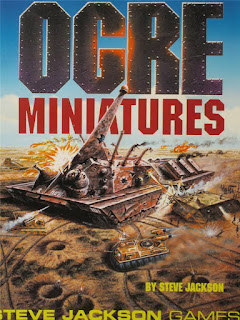 The table top version of the classic Sci Fi board game of cybertank warfare: OGRE
﻿

I posted recently about my acquisition of the newly released set of plastic models for Steve Jackson's Sci Fi game of cybertank warfare: OGRE. These models are the plastic versions of the metal models that were launched around the time of the release of the OGRE Miniatures table top rules way back in 1992. As I recall the miniatures rules for OGRE picked up a gong of some kind for being the best miniatures rules and they were certainly very good. You can pick up second hand copies from EBay or similar or you can get the rules as a digital version from Warehouse 23 which also includes some additional bits and pieces, an errata as well as a FAQ section.

Coming back to the box set of models (which look even better now I have had the chance to really take a look at the) you also get a playsheet for OGRE, a couple of record cards for the OGRES themselves and a special edition D6. What I missed the first time round was the fact that the playsheet refers to the OGRE miniatures table top game rather than the boardgame. 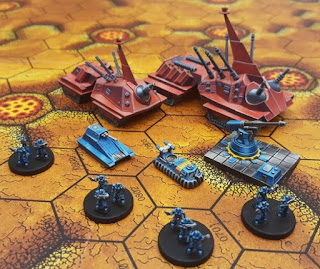 A selection of OGRE Miniatures deployed in their boardgame guise.
﻿

That means NO hexes!

The play sheet is headed up as OGRE Miniatures Lite  - essentially the basic rules using the models in the box set. All measurements are in inches but combat is the same as the board game. I owned a copy of the full edition of the miniatures rules some time ago but no longer have them. A quick digital download from Warehouse 23 will put this right however and at a very good price.

One of the things that struck me with the play sheet was the very short ranges employed which means that players are forced to get 'up close and personal' to secure a victory - none of this sitting on the baseline and lobbing missiles at each other although missiles do feature. There is a rationale for this in the designers notes from the miniatures rule book which I will need to take a look at.

I am rather pleased at this turn of events as it will mean that the models can be used on a conventional table top rather than solely with hexes - which I planned to do anyway. It also means that I can justify getting some rather nice looking Sci Fi terrain, buildings and similar.

This is a self contained project that can be slotted in as and when needed so at present there is no rush.
Posted by David Crook at 13:25

One word of caution, for when you get to the assembly point - the plastic used for the miniatures does not respond very well to my usual tube of Testor's model glue. I ended up using CA...

Thanks for the heads up re Testor's. I tend to use Humbrol for plastic kits although CA (Superglue?) would be an option.

I am looking forward to tackling these but they are a way off yet.